I’ve got various collections of photos from walks I took this autumn, and never got around to blogging – exploring the Malago, and the Avon at St Anne’s and the Greenway.  Full photosets under title links, and if you mouse over the top photo, it should turn into a slideshow.

I’ve walked along the Bedminster sections of the Malago, down through the parks, but for some reason I’ve never gone past Parson Street before.   This was a babywalk with Cee and her son, and Vik, and I loved getting to see this area I’ve looked at on maps, and passed in the car.  And it’s beautiful!

We walked through the parks from St John’s Lane, then down Hartcliffe Way, and then the sidestreets.  We’d passed the river as a little stream, overgrown with plants, a treecreeper on a tree as we turned into the park. 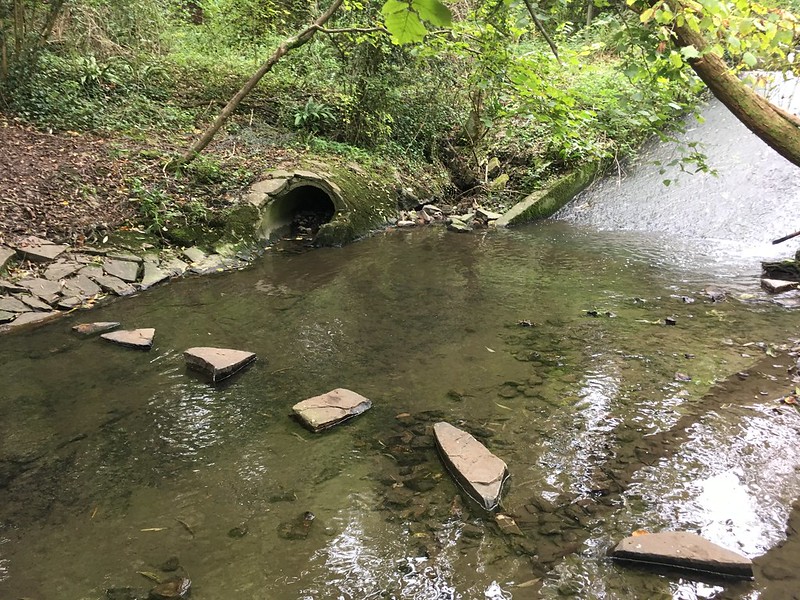 Manor Woods Valley starts as an open field, with the river underground in a dip in the land, and it’s a great open space, rising to a hill, but nothing unique until you hit the Malago Interceptor, aka the Dreadnought Storm Drain.  I’ve read about this on urban exploration blogs (examples here and here ), so it was fun to see it in real life.  I did check the gates, but it wasn’t open that day…   The Malago looks like it’s just a stream as it enters the huge structure, and it’s intriguing, imagining how it could be needed.

The river through the woods has tons more man-made interventions, so many different kinds of weirs, a “lake” (admittedly it’s been very dry this year, so it is probably fuller) and stepping stones.  The path up the west side is tarmac-ed, but a ton of desire lines lead to the water.   We saw a kingfisher flash up the river, and a surprising number of bikes in the water.   At the top we turned back and walked the path through the woods, which runs so much higher (and has steps up the steep side which was fun with the pushchair!).   The two paths look really different, and it’s fantastic place to explore. 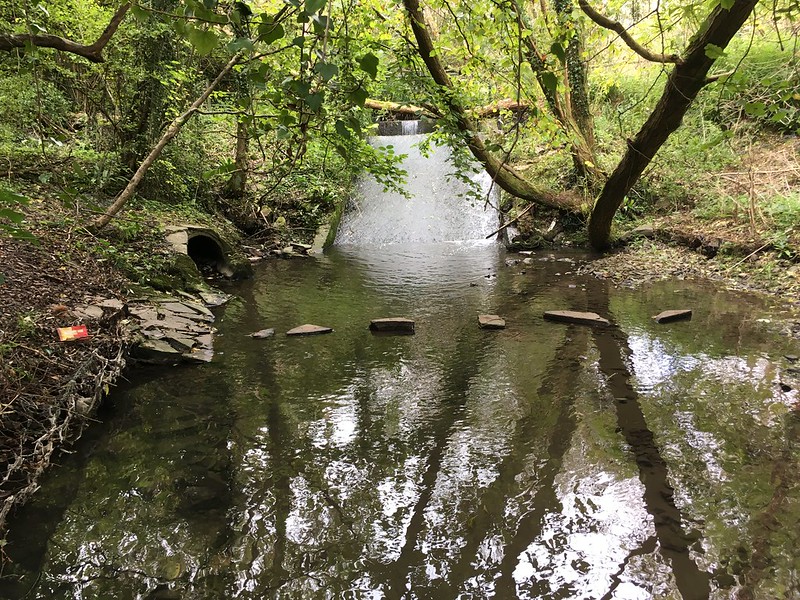 A high tide walk – Netham to Bristol via the secret path, car parks and the Greenway

I was really excited to see the Netham Weir, which tries to stop the Avon being tidal, when I walked it with Richard White, but I wondered what it looked like at Spring Tide, the highest tide of the month.  So I was really happy Tracy Homer was up for walking it with me on the October Spring tide. 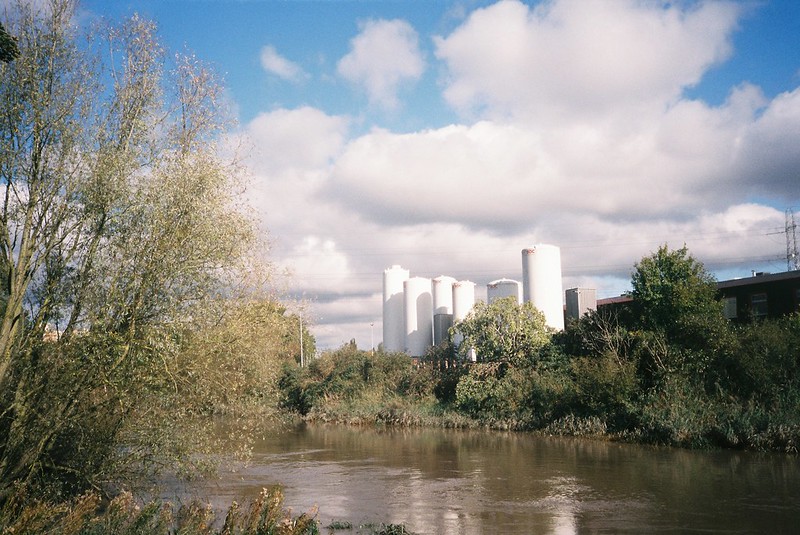 We started off at Temple Meads station, and route-marched down the Feed Road, to get off at the weir, only to find that at high tide it was completely underwater – wow!   So strange to think that all that engineering, that long triangle structure and all the sluice gates were submerged, but this is why those flood plains at Keynsham are necessary, because it’s one of those things, that at the Spring Tides, or if there’s been a lot of rain, the Avon is too strong for people to change.

We walked back to find the “secret” path, which is so easy to miss in a corner of a car park.  Down the narrow fenced in path to come out under the Brunel railway bridge, and the river looking serene and full in the sun.  We started off along the path, until I realised that those signs I’d laughed at with Richard, warning us about the eroded banks, and that it’s dangerous at high tides, wasn’t just talk – the eroded part was underwater, and we had to turn back.

We pushed through a hole in the fence onto the St Philips Causeway car parks, and followed the cycle route signs and the map on my phone, to get back onto the path.   Of course we went back to see how far we could get from this side, then headed down the St Philips Greenway, the path along the river from the Causeway back to Temple Meads.

We crossed at the suspension footbridge, enjoying the bounce, and headed to Paintworks for coffee at Bocabar before getting back onto the Greenway and clambered around on the bank when it was possible.

I used to walk this path and take short, fast bike rides up and back it, at lunchtimes when I worked in Temple Quay, and it’s always so interesting to me – how the sounds of the Bath Road are masked, and the non-designed spaces (and all the gorgeous graffiti and nature) along the backs of the warehouses and businesses.   I really like the remnants of the old piers that are still visible, and thinking about how the river has changed.

The path is closed at the railway bridge, thanks to the interminable works on the white elephant of the Arena site, I think, so we diverted through St Philips and Temple Quay, crossing the Harbour to finish in Queen Square.  It’s always a surprise to me, how quickly the tide drops once it starts, but I was so happy to have made the effort to have that high tide experience. 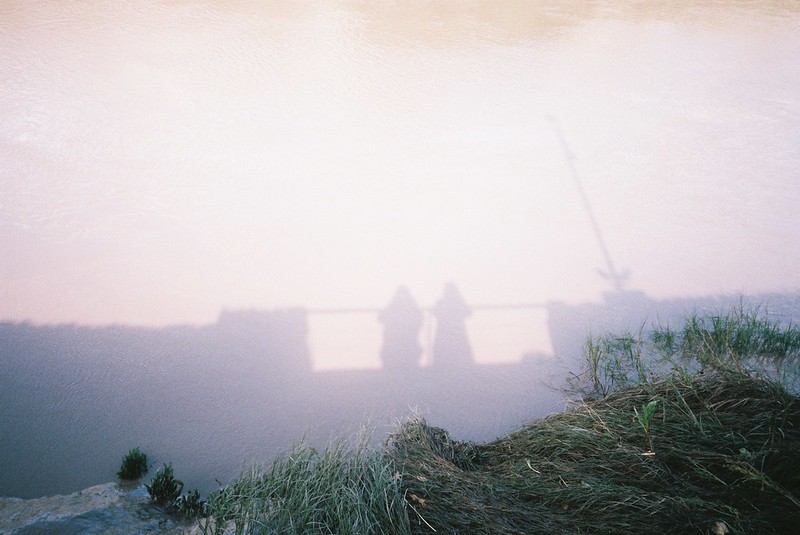 A Hallowe’en walk to St Anne’s and Arnos Vale

It started as a deliberately “unscenic” short walk and got a bit longer than we expected!  Cee and baby skellingbone in the pushchair, and Vik, again, and the Feeder to Netham Weir again as the starter.   “I bet this is just what Venice looks like” was my mantra, as we enjoyed all the buildings backing on the Feeder.   I wish I could find a way to talk the photos I want, of places people stop for lunch, the little oases in unlikely spots, because there are some great ones down there. 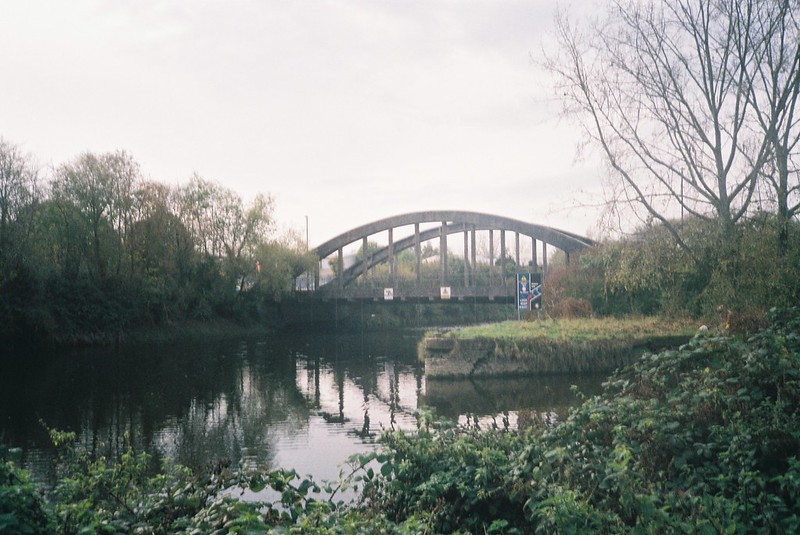 This time the weir was visible, and I have to admit, showing people this spot makes me grin every time.  We were going to go down to the Black Castle, as neither Cee nor Vik had seen it, but once we crossed the river, we diverted down a footpath that looked gloriously rural… if you didn’t look to the right or left!  Perfect autumn colours, I wish I’d taken photos, and a path sprinkled with golden leaves – and the great big fence on one side, and the definitely unscenic path on the other.  I wish I’d taken a photo.

I really enjoyed poking around the structures at St Anne’s, because they’re so functional, and feel so undesigned.  I don’t understand why they’re there, the concrete walkway overhanging the water, but the views to Crew’s Hole are always good.  We diverted to the supermarket for snacks, drinks and free samples of cheese, then crossed the Avon on the footbridge, with a plaque commemorating the ferry it replaced, that had dated back to Medieval times.

Back down the path to Netham on the other side of the water, past some really strange structures.  A hole in the wall that seemed to have a boiler in it, bricked up windows, and possibly my favourite ever doomed cry from a graffiti artist for people to leave his stuff alone.   And a weird shack on the bank opposite, un-photograph-able, that we’d walked above without realising – someone claiming a little bit of the riverside to build a place to fish, or just enjoy the water.

Past the point where the Feeder separates from the Avon, and goes off to become the Floating Harbour, negotiating the nasty Netham Lock junction, then the slog down Whitby Road, talking about all kinds of things as we went.

The Black Castle pub is just the strangest thing – a folly, a castle built to house horses, made out of the literal by-product of slavery.  I talked about it with Richard White when we podcasted there, if you want to know more.  We poked around inside, just marveling at it, then crossed the road for coffee in the café at Arnos Vale Cemetery, and a quick explore of the gravestones, collecting names and stories.   What could be a more apt way to finish a Hallowe’en walk?