Last Saturday the snow was still around, and I went walking in it with my friends Kate and Tim.  They’d never been down the closed part of the Avon footpath, or seen the Netham Weir, which is there to try to stop the Avon being tidal, so off we went.

Map of our walk:

And photos too.   If you mouse over/click on the first photo it should open the slideshow, or you can go directly to the flickr album. 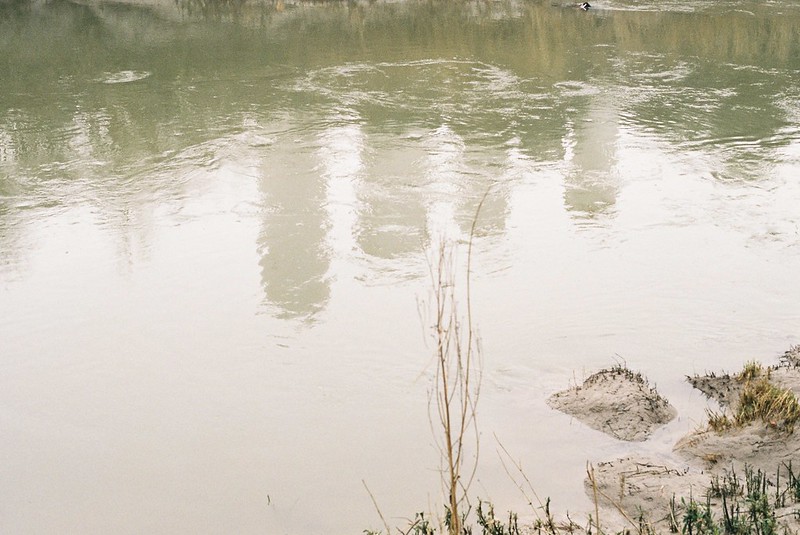 We came onto the footpath via the railway bridge that takes the line down to the southwest, and walked the snowy Greenway crunching through the snow.  In the spring and summer, the green is an apt name, with buddleia and other undergrowth on the river side, while the walls of the warehouses are bright with graffiti.   This area is under threat, as although the land is full of businesses taking advantage of the cheap land, the Council wants to re-brand it as a new Quarter, with luxury riverside apartments (of course) and sites for start-ups – basically taking a working class area that’s thriving, albeit not in the most picturesque way, and gentrify it.  I guess we’ll be losing access to the river here for years, so it’s apt it’s the route to the closed footpath. 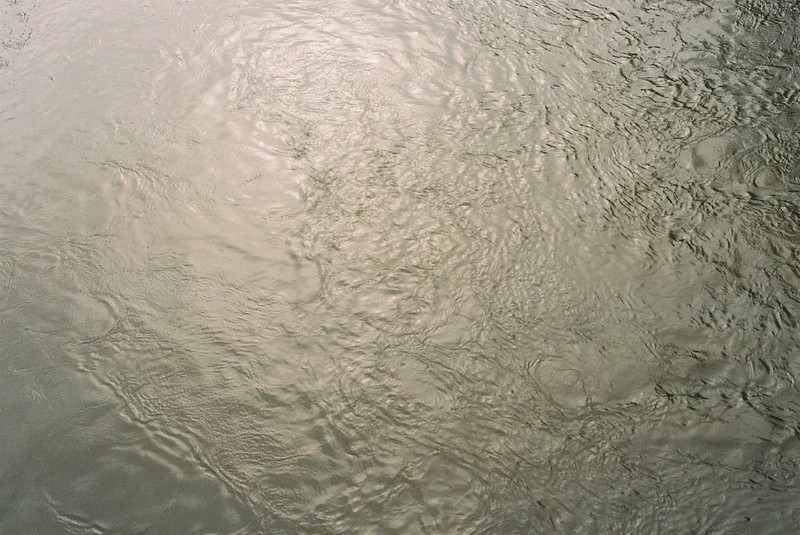 That closed path is always fascinating to me.  It’s not fenced off – there’s a gate with warnings on the St Philip’s side, and it’s pretty hard to find the narrow entrance on the Netham end, if you haven’t been there before, and I’m guessing that’s because as you walk down it, it is off-putting all by itself.

It’s closed because part of it has eroded into the river.  I walked it in the summer, with Richard White, when we recorded a podcast about the visible legacies of the Transatlantic Slave Trade along the River Avon, and it was fine in the middle of a sunny patch, if a little crumbly, but when I tried it in October with Tracy Homer, we saw exactly how inaccessible it is at high tide.  I can’t emphasise this enough:  if you want to walk this path, check the tide times, and be very, very careful when the tide is coming in, because it would be easy to get caught here, especially as the silty soil is likely to turn to sinking-mud before the water reaches you. 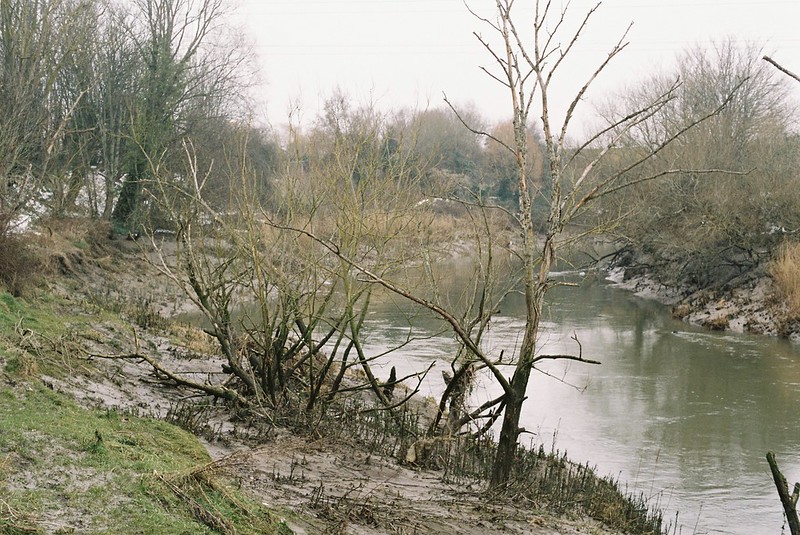 We were fine – the tide was on the way out – but I realised after that I should probably re-calibrate my “it’ll be fine”-ometer, because I have a habit of dragging friends into slightly ropey situations, that are safe, but uncomfortable, so probably not an average definition of “fine”.  The eroded parts were very slippery and muddy, and we couldn’t have walked back the other way.

But it’s an extraordinary landscape, with industrial shapes on the other side of the river, with no footpaths at all, and above the path, the spiked fence around the edge of the Avonmead car parks.  In between, it’s a green corridor, with the path covered in snow.  There are a couple of fallen trees, and it feels like a perfect example of “urban nature” until you get to the eroded section, where it looks like some kind of post-landslide.  In the spring and summer, there’s a lot of undergrowth, and the trees are green, but the winter tides had washed the plants away, and the dormant branches looked dead.  I love it, even if it was squelchy and slippery! 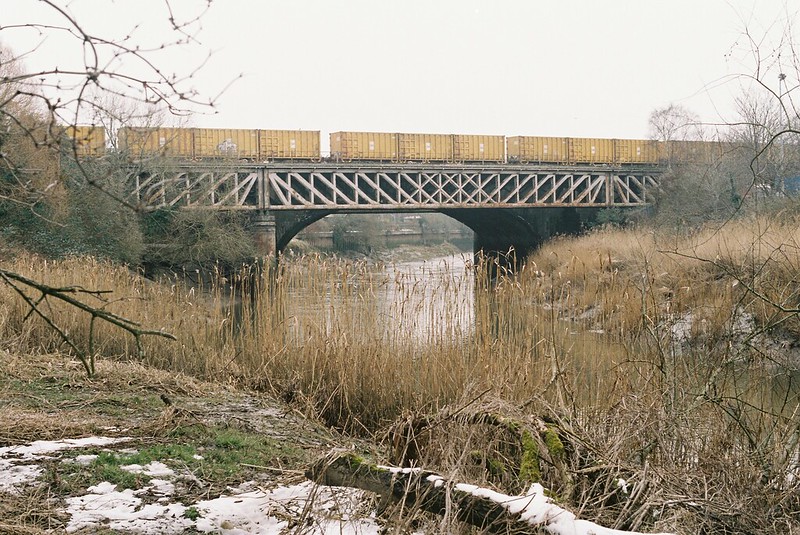 Once we’d scrambled up onto the firm land again, the way forward is dominated by Avon Bridge, the railway bridge carrying the mainline to London.  It’s really three bridges, two rusty modern metal ones, on either side of Isambard Kingdom Brunel’s gothic stone arches.  The path finishes underneath it, and it’s a natural place to stop and explore.

Up the small alley, one of the businesses wafting cumin, and over snowy car parks to Netham Weir, which was roaring with snowmelt, loud and fast, 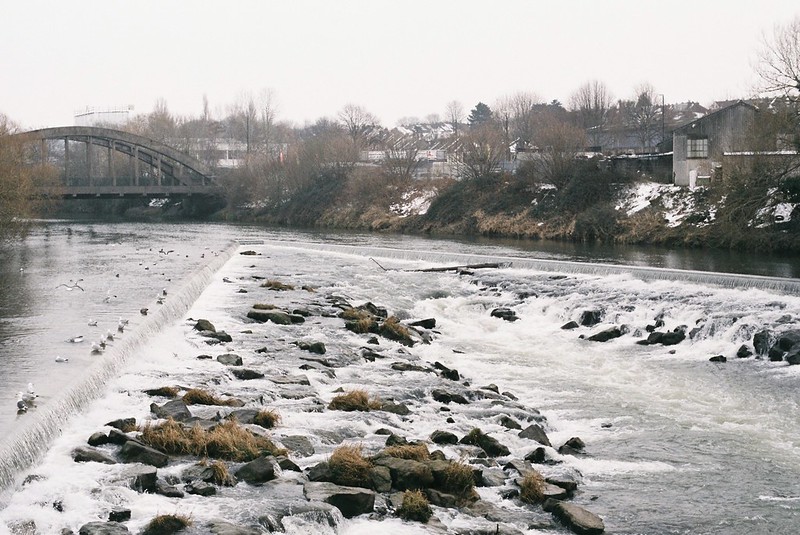 We went up as far as the bridge, then back along the Feeder, and through the Avonmead car parks, to the Greenway again.   Over the suspension footbridge at Sparke Evans Park, coffee outside under blankets at the café in Arnos Vale Cemetery, and finally, after getting confused in Paintworks, Niall McDiarmid‘s Town to Town exhibition at the Martin Parr Foundation.

Of course I recommend everyone walks the Greenway before it changes, and the closed path, as long as you choose your time well, and don’t take risks.  It’s maybe not everyone’s idea of picturesque, but that combination of industrial and urban nature always makes me happy, and there’s always so much to see.  Just wear mud-proof clothes and take care!