I try not to repeat walks too frequently, but I really loved exploring the disused railway line in Portishead, and it’s ideally a winter walk, as it would be tons harder when covered in undergrowth, and with the plans to reopen the line, I wanted to do it again, while I still can.  So Vik and I went back last Saturday to see the line, and then walk down the footpath along the Bristol Channel to Clevedon.

and I have an album of photos on flickr, and below.  If you mouse over or click on the first image, it should bring up a slideshow, or use this link. 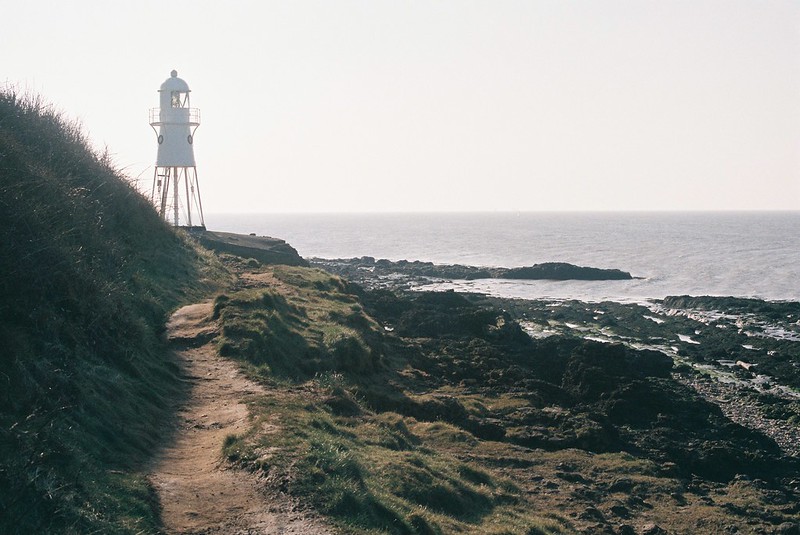 It was a cold, sunny, winter day, and we got off the bus at the Portishead Sainsbury’s, and were almost immediately on the line, from the barriers at what’s now the end of the line, on the plot of land that’s due to be the new station.  I was there in the summer, and there are photos, and a podcast about the history and the future of the railway here.

We walked down it, and it’s one of the things I really enjoy about the line, how accessible it is.  There’s a huge spiked fence at the other end of this stretch, but you can just open the gate and walk through. After the first little rough part, the rails are so clear. 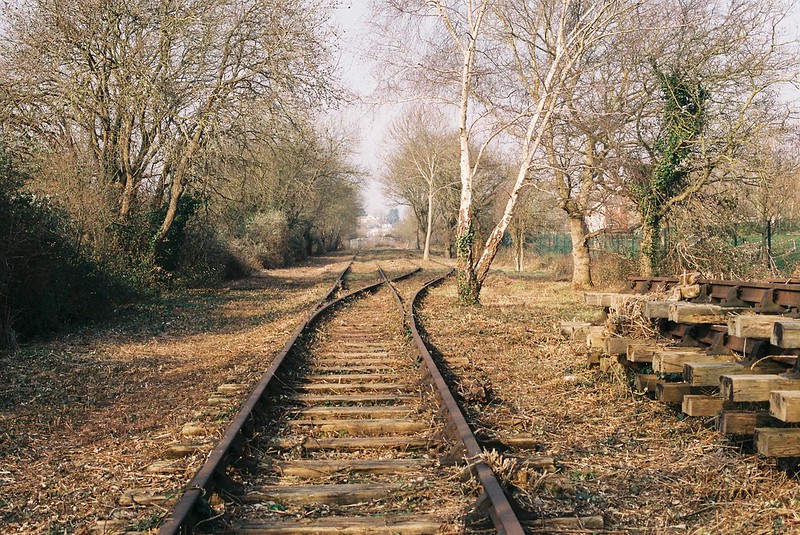 Everything was crunchy with frost, and the air was freezing.  The light was changing so fast, mostly grey, but with patches of sun.   It was fun showing Vik all the things I saw last time I walked here, but also seeing new things.  Just the different weather changed how it felt to walk, with the remains of the undergrowth more brittle under our feet, the sleepers less spongy.  There were the same boundaries between sections that had been cleared at different times, but it was easier walking. 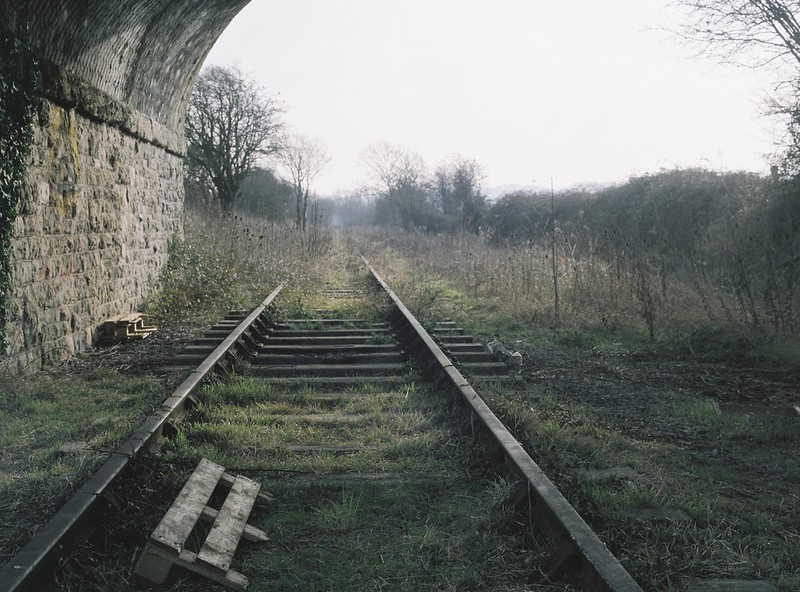 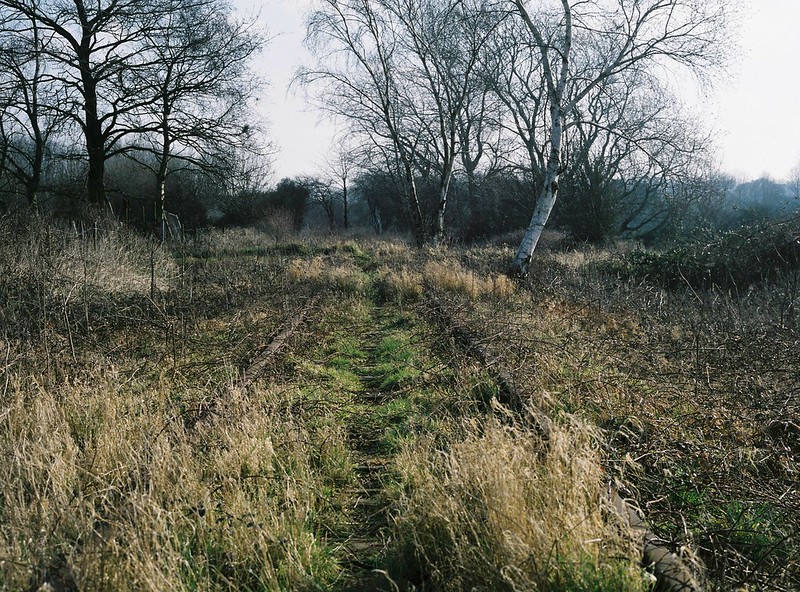 We were walking through the birdsong, and suddenly there was this crashing in front of us, as a couple of deer ran across the line ahead of us, their white tails highlighting the way they sprang.  As we carried on down, there were two in a farm field on the left, and a herd on the right, and later, a couple on the line ahead of us, springing effortlessly through the brambles, which I still don’t understand, because we were pushing through them. 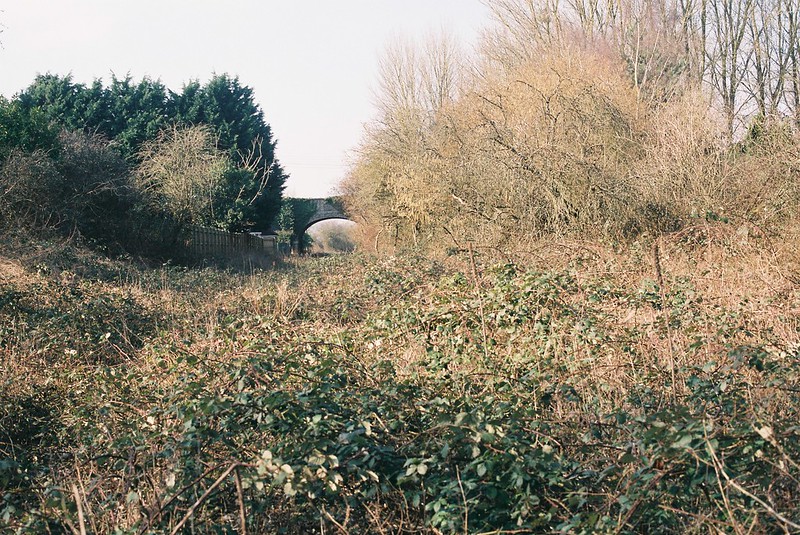 It felt like it was easier going than last time I walked the path, with signs other people had walked, like strands of fabric caught on the thorns.  But still hard (and I still have the scratches through my jeans to prove it!) so I was relieved to find the place Tracy and I had come off the path on our last walk.  Except there was a tiny problem!   Last time we climbed down and up an empty ditch, and in the weeks since, more work had been done, and it was now very much not dry, as it turned out it had been dug to let water come through the bridge-let, and it was now a rhyne.   My strong recommendation is, if you do this walk, you don’t even bother with the brambley section after the second Sheepway bridge, but come off where I’ve marked it on the map.  Don’t do what we did!

We looked at it, and thought we could maybe hop across where the water was coming in under the line, and over a barbed wire fence.  Vik got across safely, but when I took my big step, I landed not on solid earth, but went straight down, knee-deep into freezing, wet, stinking mud.  Luckily Vik could pull me out, but I was cold and freaked out, covered in blood because I’d grabbed a bramble instinctively, though my first reaction was still to take a photo of the ditch, because of course it was! 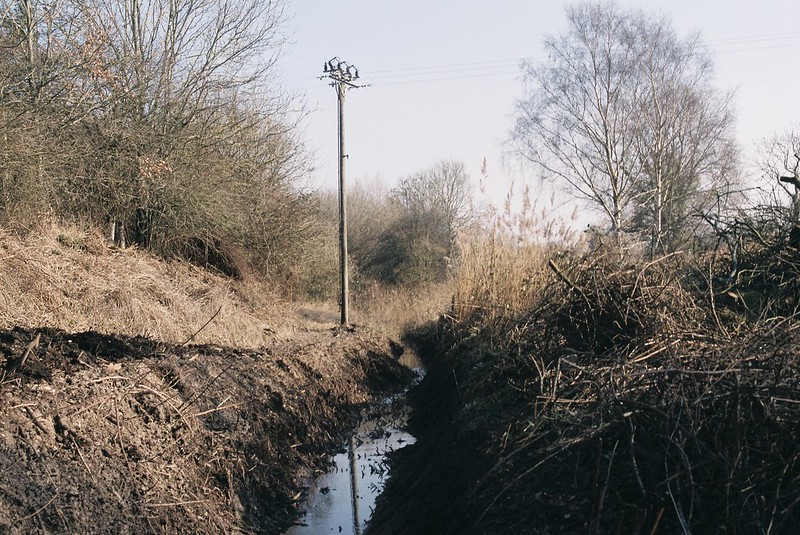 So that was fun.  I’d got over sniveling about it by the time we got onto the cycle path, and had a diversion looking for a footpath that’s on my OS map, but now is covered in car parks, part of the Royal Portbury Dock.

We got back on track, getting onto the cycle path alongside the Port, heading back to Portishead, with incredible shadows on the netting on the fence, and a group of Sustrans volunteers doing work to clear the path (they had a wheelbarrow full of top class biscuits!). 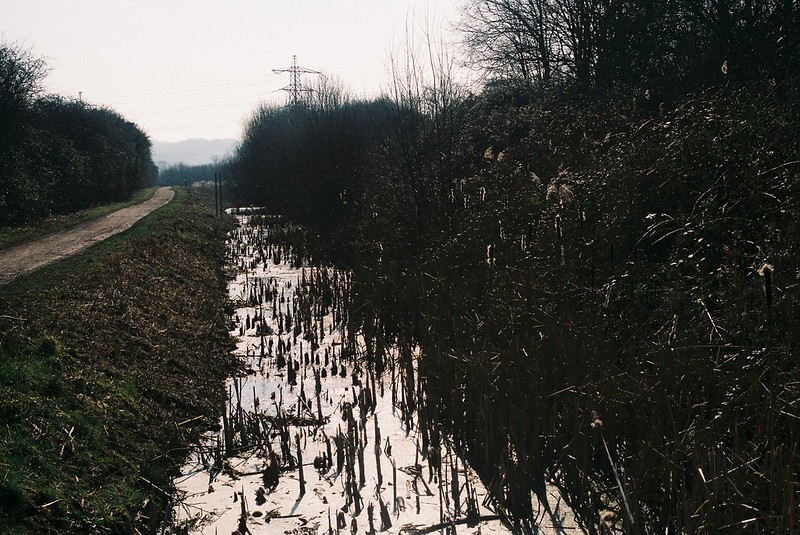 After the paths, we walked back along the pavements (we should have taken the footpath that seemed to end at the sewage works, but actually joins the waterfront path), with random signs, and a giraffe sculpture looking like it was nibbling the thatch on a cottage.  We headed into Portbury Wharf Nature Reserve, this strange landscape bordered by the port, the new Marina developments, and the Bristol Channel, with pylons marching out of an electricity substation, and a sewage plant, and between them, ponds, pools and frozen rhynes.  It’s got lots of bird hides, and footpaths and locked gates. 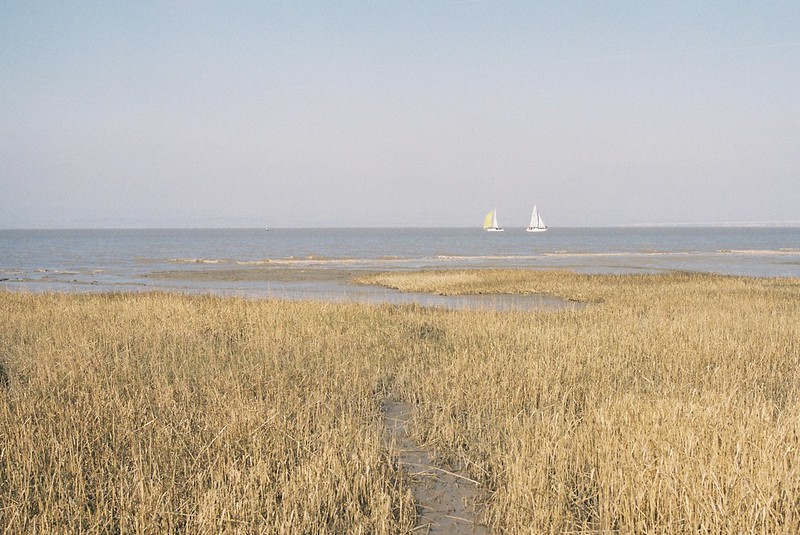 At the end of the path, the Bristol Channel was sparkling in the sunshine, with sailing boats racing in the wind, and the foreshore yellow with dried grasses on the silt banks.  We walked down, trying to find the water, stopping when the mud was oozing around our feet.  A skein of geese flew low over the grass, honking and calling as they landed on the lake.

We headed into the Marina, passing the Portishead sculptures, to have coffee in the sunshine, sheltered from the wind, looking at all the white boats, and the large scale of everything in the Marina.  Then, ready for part two, the path down the coast to Clevedon.

This is part of the Gordano Round loop, and is almost all along the coast.  I’d walked a little bit of this the last time, but this time was high tide, with huge container ships and tankers leaving the ports, and moving fast down the water.

The path starts with open green space on one side, and a small shelf edge down to the pebble and muddy beaches.  As we left Portishead, it began to narrow to single file, with great rock formations on the beaches, and then the Black Nore Lighthouse, looking like it was about to scuttle away.  I’ve never seen a lighthouse like this, with the spindly multiple legs, and it was one of the highlights of the day.

It’s a really fascinating path, one that feels slightly precarious, as there are all kinds of places where it feels like it’s eroding into the sea.  It started off with ferns on the edge of the shelf, and chest-high brambles, with small straggly trees, that made me wonder how much of the sea you can see here in the summer.  You know you’re leaving the town as the dog walkers stop, and at least when we walked, it feels really private, going twenty minutes at a time without seeing anyone else.   And once we’d left the town, it was so quiet, too, with just the sound of the sea on the rocks beneath us.  I especially liked the strange, 1970s scifi landscape (oil stores?  another sewage works?  a nuclear bunker??  It’s not labeled on the maps, which just makes it more intriguing..) 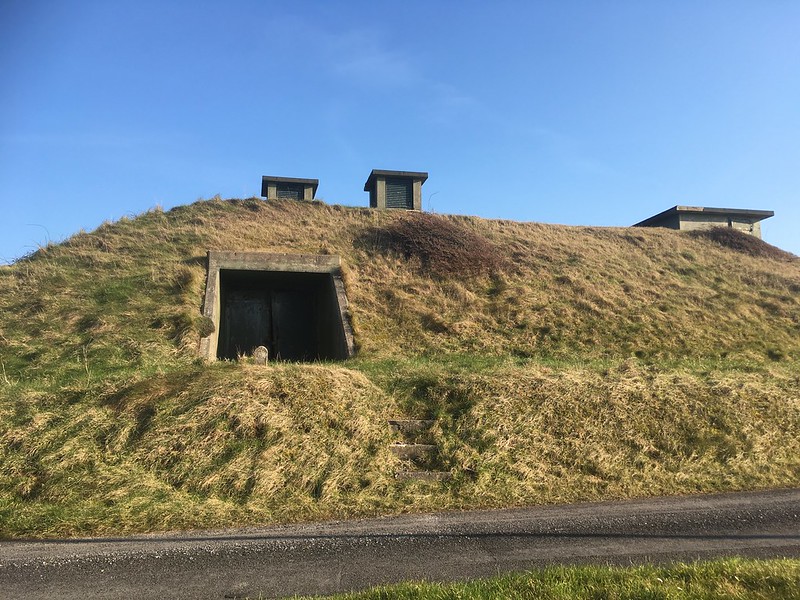 The paths are narrow, and further down the coast get a little bit more like cliffs, undulating up and down.  They’re muddy and off-camber, and the narrow line of scrub didn’t feel like much protection as I slipped and slid.  It was hard to watch my feet to try not to slip, and keep the sun glare out of my eyes, and keep looking at the views!  I imagine in the summer it’s more like walking through tree tunnels than walking along the seashore.  The path ran right under the balconies of a static caravan path, and then the view of the curves of the coast opened out, so that with the sun low in the sky, and the sea glittering, with Wales a very faint hazy outline, so it felt almost Mediterranean.  Almost! 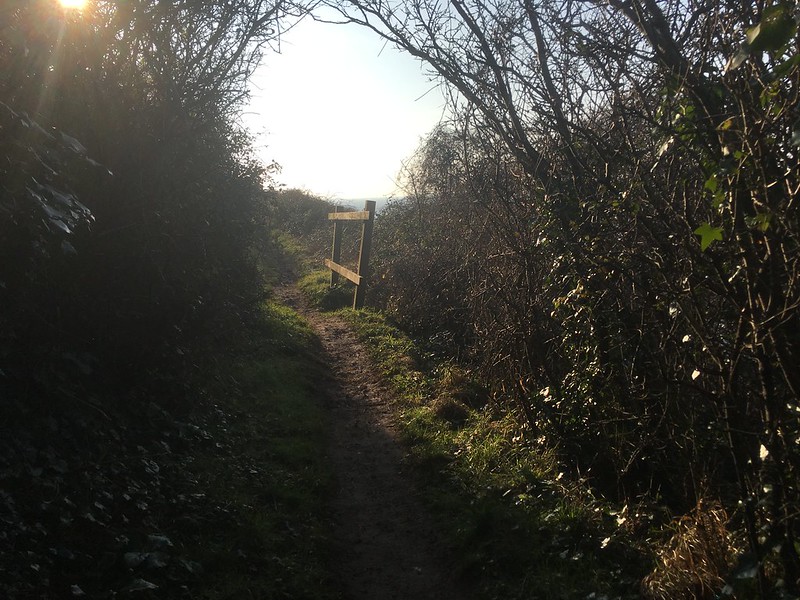 We knew we were getting closer to Clevedon when we started passing dog walkers again, and family groups, which felt strange after this quiet, empty walk.  The paths were concreted here and there, up the little hills, and we could see the first views of Clevedon Pier as we rounded corners.

We’d walked a long way, and we did think about going down onto the pier, and waiting the hour to see the sunset, but there’s that completely modern thing of looking on a phone to see when the bus times are, and realising the next one is in three minutes, from a bus stop right across the road, and that felt irresistible after the large steps and climbing over brambles, followed by all the little footpaths.  We jumped onto the bus, and watched the long shadows and golden light over the fields back to Bristol – tired, achey, happy.