Last Thursday was the hottest day of 2018 so far, a truly beautiful day, where it felt like summer, not spring, and a perfect day for a walk.  Tracy Homer and I were exploring some of the nature reserves along the Avon – a very similar walk to one I took in November last year with Vik, but in reverse.   It includes four very different nature reserves:  the Goat Gully; White’s Paddock & Bennett’s Patch (aka the home of the wicker whales); Bishop’s Knoll Woods; and Old Sneed Park Nature Reserve.

My map is here:

and there’s a photo album on flickr, or if you mouse over or click on the first photo below, it should open up the slideshow.

We met on the Downs, near Bristol Zoo, and I got there early, so found a patch of shade and primroses to sit in, laughing at myself for getting out of the sun, when I’ve been complaining for weeks about the lack of it.  But that transition from grey/drizzle to full-on summer (and back again) was surreal, and my body had that confusion of not knowing what to do.  It was beautiful, though, with the sounds of birdsong, and the buzzing of light aircraft overhead, the perfect place to wait.

We started by heading down to the footpath that skirts the very edge of the Downs, with stunning views of the Avon Gorge, and especially the quarries in Leigh Woods.   I don’t think I’ve really looked at them before, because when I’ve walked that path the other way, it’s been the suspension bridge or the Iron Age fort that have snagged my eye – or maybe it’s because the leaves aren’t out fully yet.   Either way, it was fun to notice them all. 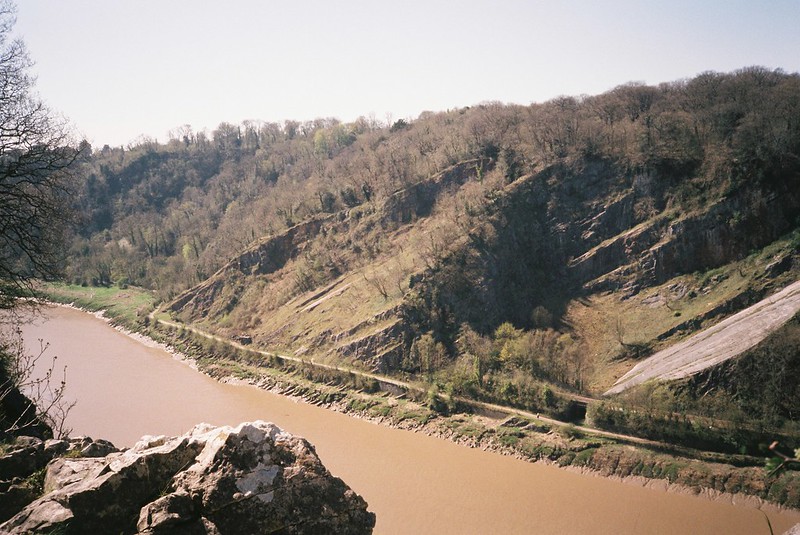 We walked through the woods at the top of the Gully, then through the meadow section, and onto the first rocky outcrop of viewpoint.  I’ve been having knee problems, so I was a bit more wobbly than normal, but it’s so exciting to show these amazing views to someone else.  We headed to the Downs viewpoint, failing to buy icecream, but loving the glittering of the sun on the water.  It had been Spring Tide, and the river had been so full when I’d crossed Vauxhall Bridge, though already going out, and the hour between had brought down the water level a little bit, but not much. 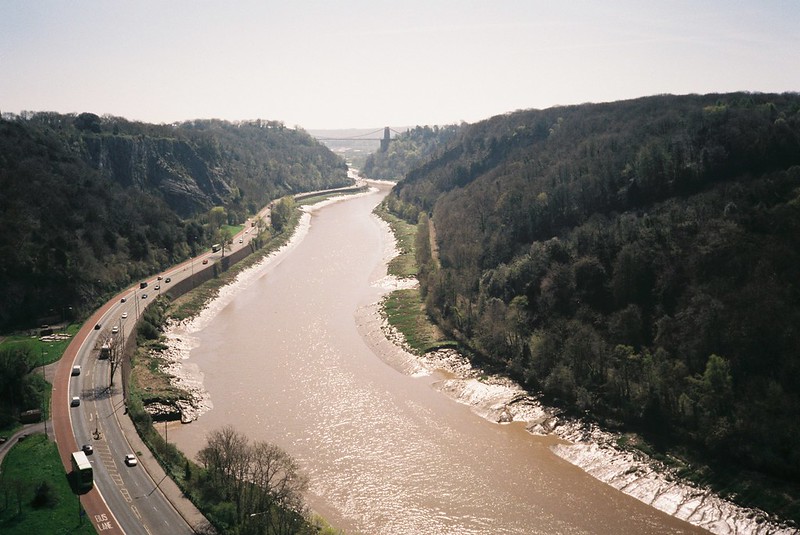 We tried to go into the northern gate for the other viewpoint, which was a mistake!   I’ve walked the precarious narrow path along the edge of the fence before, clutching the fence as my vertigo hated the drop down the slope, and climbed up, but going down was another matter completely!  We’d been laughing with a girl following her friend to the sitting point on the safe side of the fence, and freaking out about that, and she was enjoying being not the only one to think “hang on, no!”

The Gully is a nature experiment, trying to get back an environment that existed for centuries on the Downs, when people were allowed to graze sheep on them.  The idea is that the six male goats they introduced in 2011 will keep down the undergrowth, and enable different kinds of plants to flourish – but with two of the goats being killed by dogs last year, it’s not as positive a story as it could be.   But it’s an extraordinary landscape, it doesn’t feel like Bristol, more like maybe a Pyrennean or other mountainous landscape.   It’s very steep, with scree slopes and trees.  Maybe less dramatic walking down it, as you start through woods, than walking up from the bottom, but still beautiful, and unexpected. 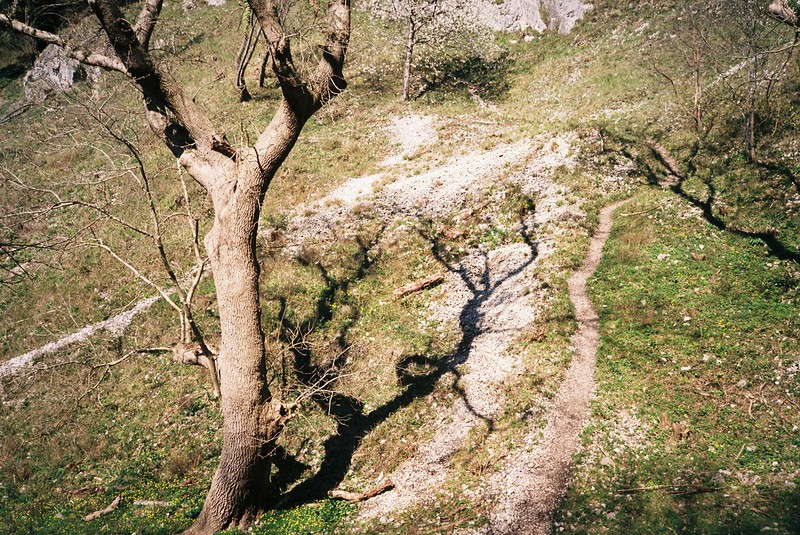 I love it, and I especially love the little shaft in the middle, providing ventilation for the Severn Beach Line railway tunnel underneath it, that looks like it’s in fancy dress as a turret.

It’s a crunchy, steep path, and I was sad we didn’t see the goats today, but it was so empty and feels lovely.  So much birdsong, and the traffic noise from the Portway muffled by the geology.

At the bottom, you have to pick your moment and race across the Portway, which I always hate, especially because the traffic islands don’t line up with the entrances to the nature reserves, because of course they don’t.   It can be a little bit hair raising.

Near the entrance, on the Portway, is the Northern Stormwater Interceptor.   I really want to find a map of Bristol’s sewerage systems, and especially the Interceptors, because I’ve no idea how they work – how does this get here, and how does it interact with the train line?  So much still to learn. 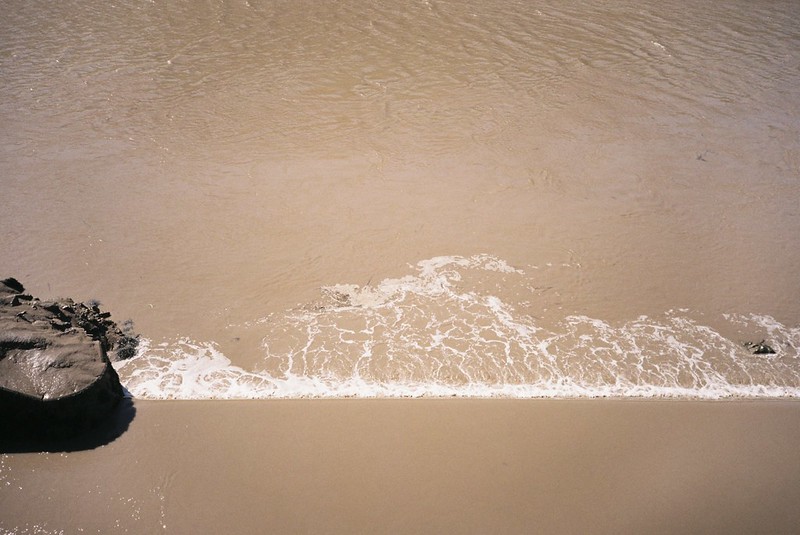 The mud was glowing in the sunshine as we walked and talked up the Portway, remembering how last time we’d walked down it together was in the ridiculous rainstorm, where we’d been soaked to the skin at that point.  We bypassed the footpath we’d got onto the Portway then, and had another scary run across the road, and turned into Bennett’s Patch/White’s Paddock, nature reserve #2.

It’s a new nature reserve, with lots of little trees, and of course, the Wicker Whales, looking a bit worse for wear by now.  We took photos (and I’m grinning at my phone shots of Tracy lying down to get just the right shot) and sat in the shade of a tree, having snacks and drinks, and more suncream, and talking about the Windrush scandal and the despicable Hostile Environment re immigration, and politics, and everything. 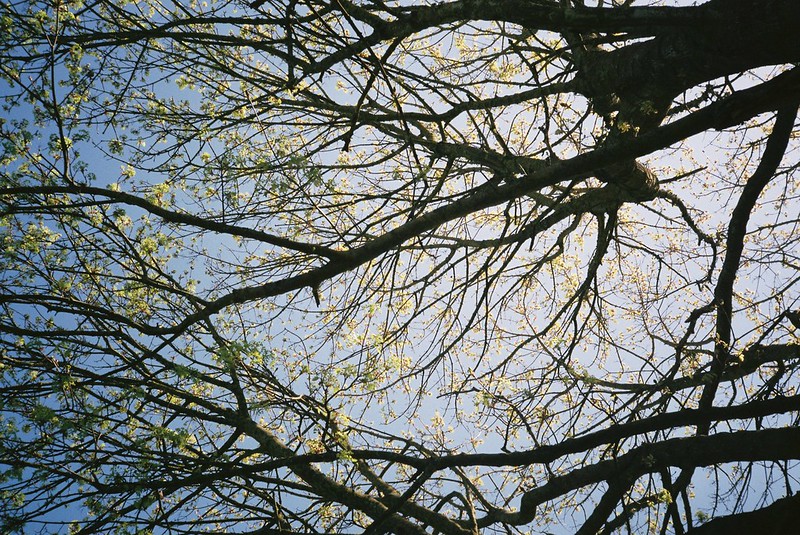 We turned back on ourselves, under the railway line and up the stairs into Bishop’s Knoll wood.   I’ve written before about how happy city woods make me, reminding me of Sydenham Hill Wood, where I did conservation volunteering as a teen, and how these woods remind me of that.   They’re on a relatively steep slope, and are a couple of former gardens – one that was terraced, with various formal structures in it, one an arboretum, with various specimens of exotic tree planted, and a little patch of ancient oak woodland.   There are the remains of structures, and the paths are a mix of stone terraces and steps, and typical nature reserve wood-banked steps. 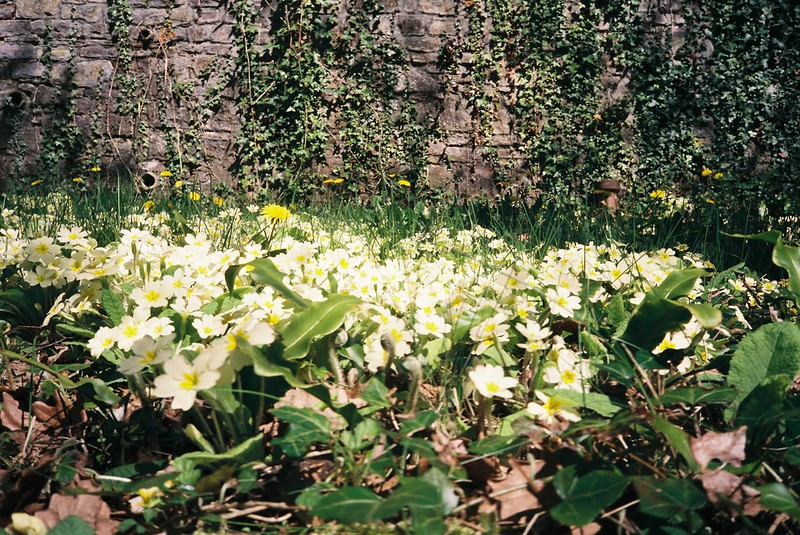 The terraces and the structures don’t have the gardened flower beds any more, but I loved the carpet of primroses, the bright yellow of celandine, bluebells just starting to come out, and the white blossom overhead. 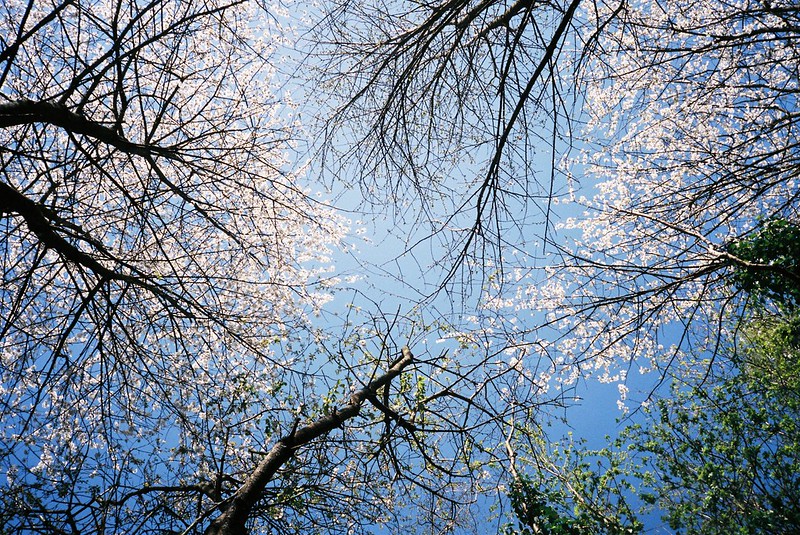 And in between, the occasional faded laminate of old photos, scenes from when the woods were a garden of a house that was turned into a temporary hospital for Commonwealth soldiers during World War I.   There are little reminders all throughout the wood, although “not this tree” had us cackling. 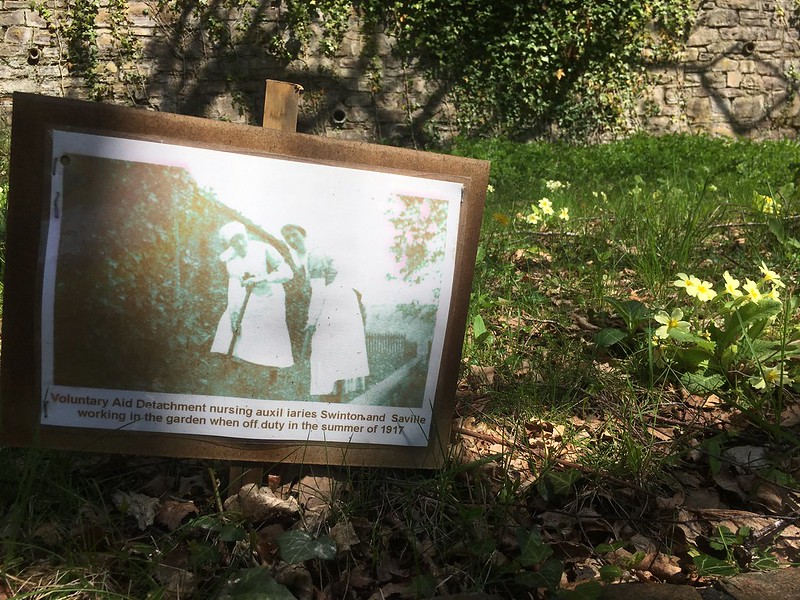 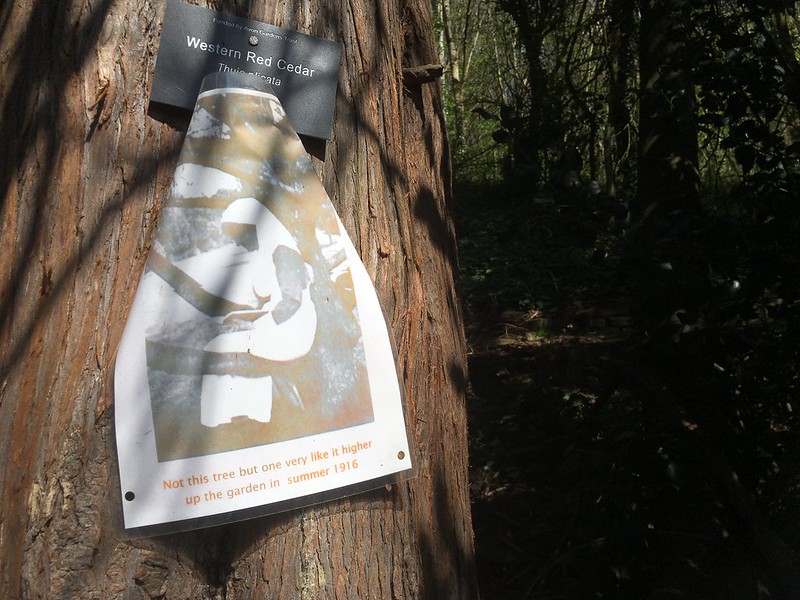 We marveled at the huge cedar in the wood, but there was some serious chainsawing going on, which felt slightly odd, so we couldn’t see the fenced off parts, higher up the arboretum side, so we moved on into the last reserve.  Got to say, the branding wars on the dividing line of the reserves made me laugh: 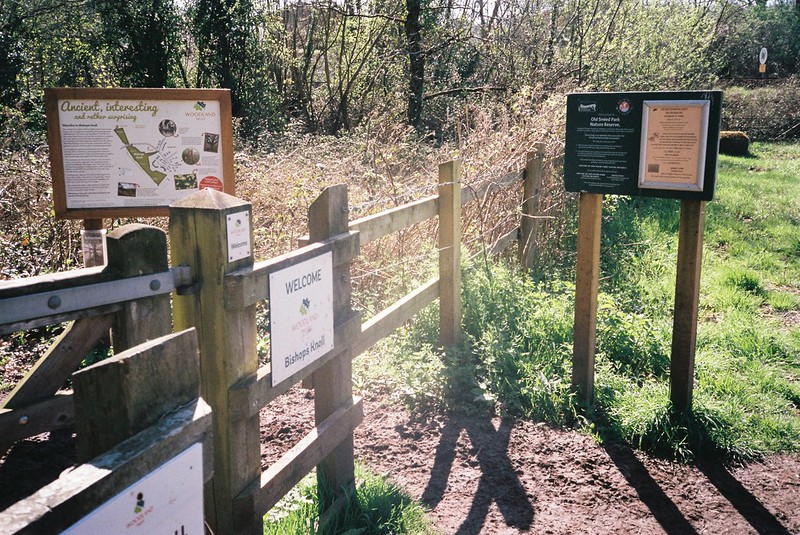 This is Old Sneed Park nature reserve, which has the Old Sneed Park Lake (and a family of ducklings –  I was super-proud of myself that I could interpret Tracy’s home-made sign language to tell me they were there!  I wish I had pictures of Tracy’s hand movements AND the cute little peeping ducklings).   It’s a lake full of warning signs, with the nature reserve fenced off on one side, and the gardens of posh gardens on the other. 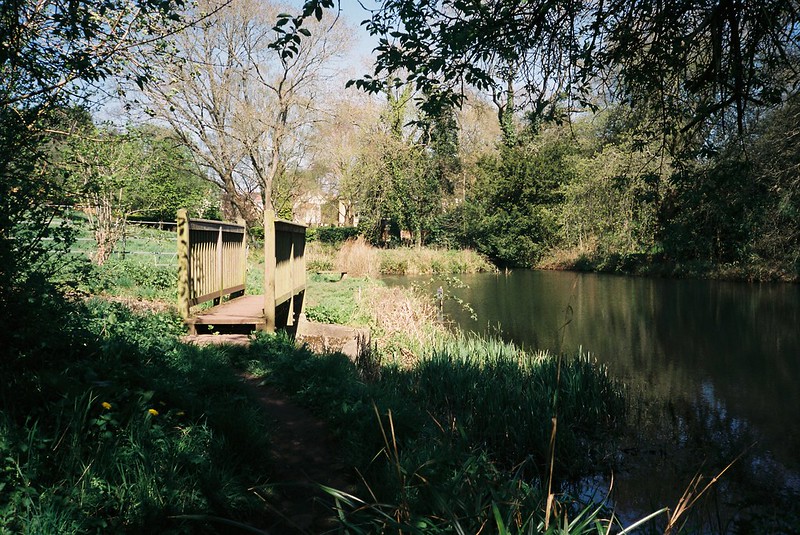 There’s a little underground stream that leads to the lake, and I think road-water runs off into it too – and then there’s a stream that runs underground to the Avon from it.   There are manhole covers in the nature reserve field, and you can hear the water rushing under them.  I wished I’d had an audio recorder about 100 times that walk. 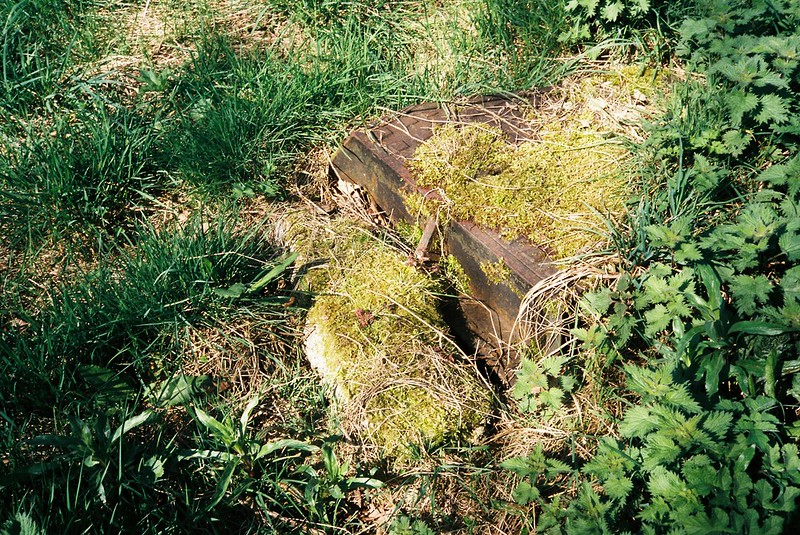 At the bottom of the reserve, along by the Portway, the soil is muddy and boggy, with a huge stand of reeds that always looks gorgeous, and sounds amazing.  We walked through the paths in it, listening to the rustling. 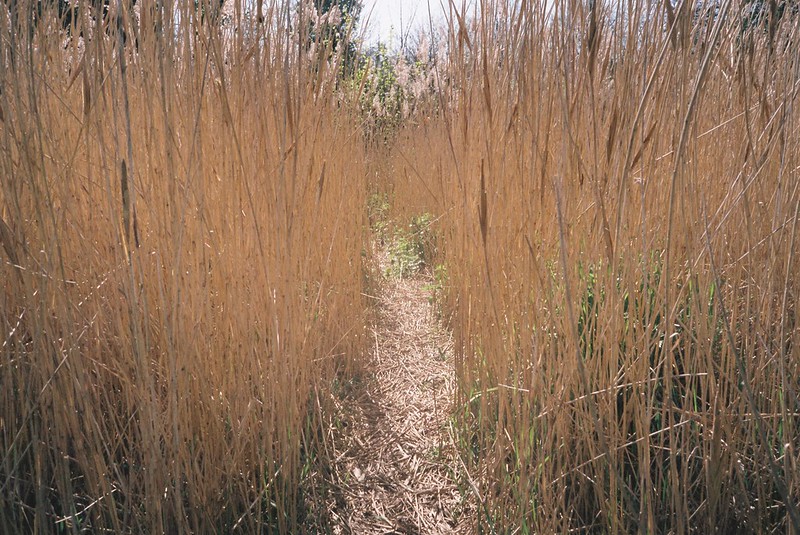 Then it’s twisting paths up through the woods, Portway-running, and down the steps to the Avon walkway again, because we’ve kind of developed a tradition of taking photos in the same place, and that makes me really happy.   We briefly thought about taking the footpath down the river, but it was way too hot. 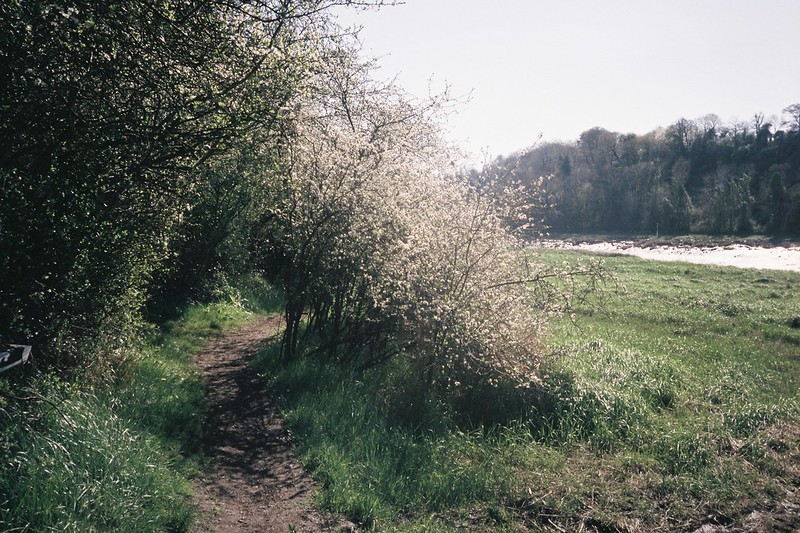 The tide had dropped so much, with banks of dark seaweed revealed on the lower slopes of the mud.   On the other side, the mud was glowing silver, and I really, really want to play with a drone one day, to capture the patterns.  A part of the bank had been repaired, and the narrow path, edged with trees, was now a cut-back muddy vehicle trail – a huge shame.

A little highlight was when Tracy pointed out the big evergreens, and how they were making popping and crackling sounds, presumably the little pinecones opening to let out the pollen?   It was a really lovely sound though, I’ve never noticed it before.

We stood on our usual viewpoint of where the River Trym meets the Avon, and looked up the river at the mud. 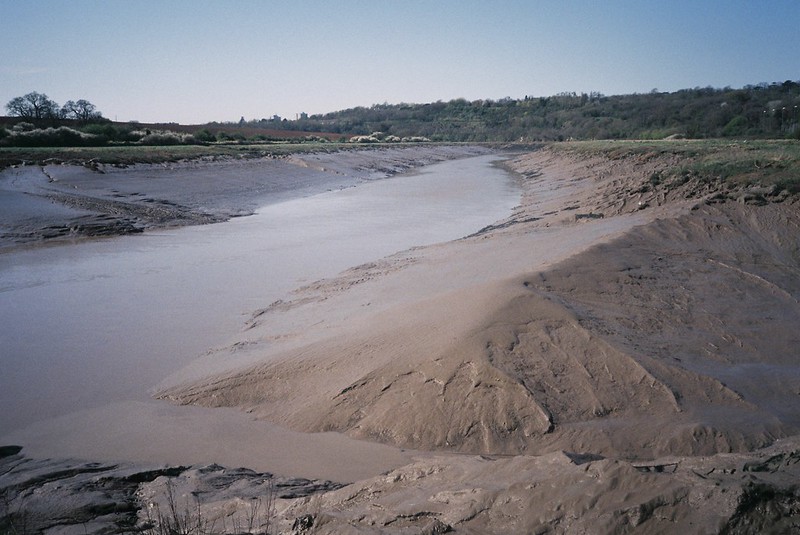 Our last stop was the road bridge over the Trym, and I love this run of photos so much.   First, looking down at the Trym mud (mobile and film versions) 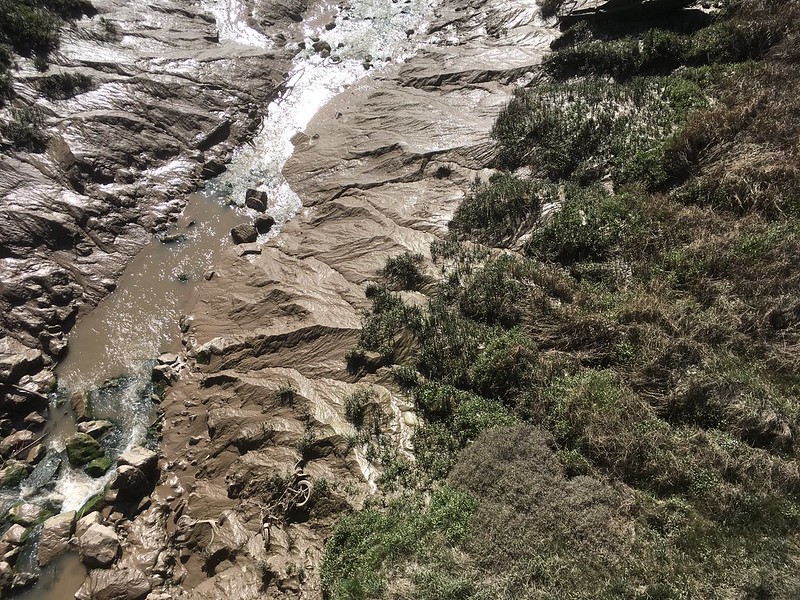 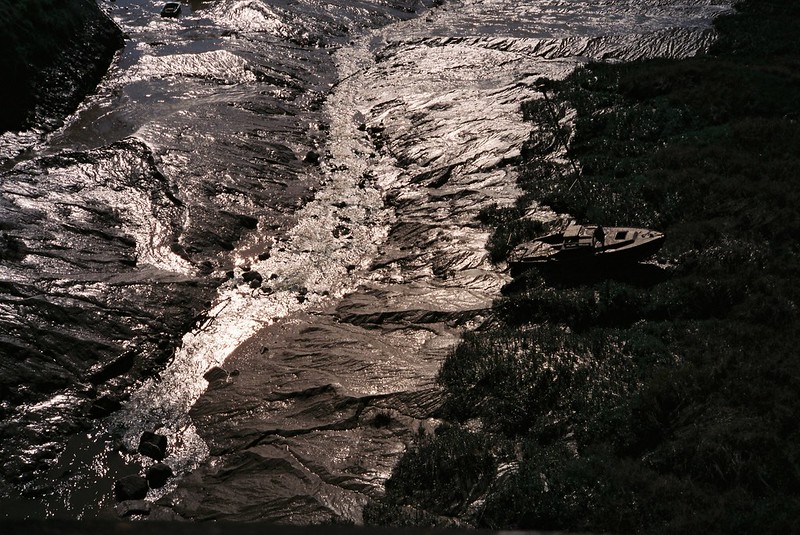 Then looking west, to where the Trym and the Avon join, then our final Portway dash to take a photo from the other side of the bridge – and wow, how different they look!  Phone photos: 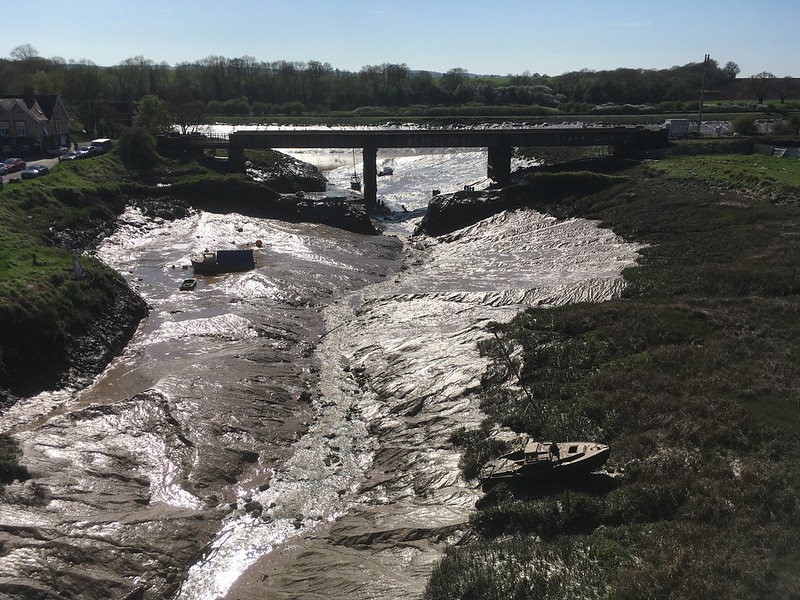 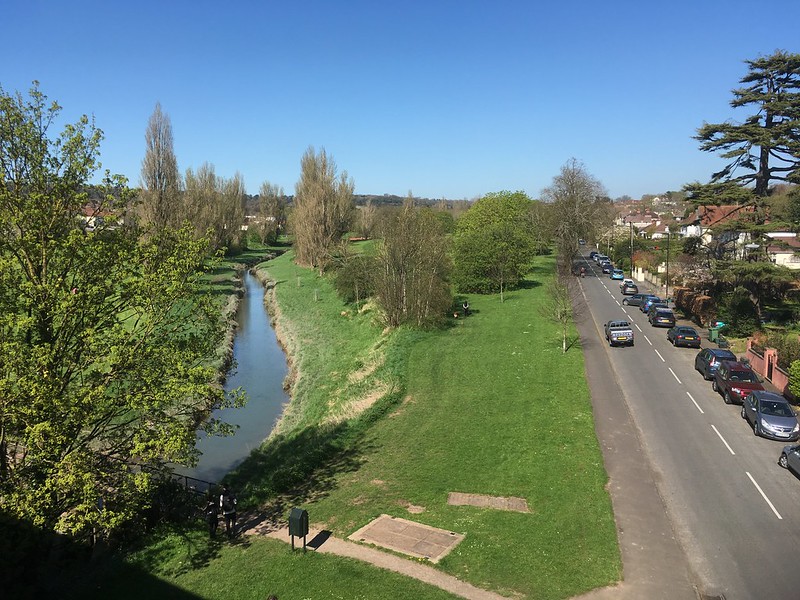 You can just about see the weir in the bottom of the second photo, that’s the reason they look so different.   It keeps the tidal Avon out of the Trym, but I really need to come up here at Spring Tide some time, and see what it looks like at high water.   I can’t believe I only stood on this bridge for the first time on our River Trym walk, because it’s so interesting in so many ways.

We were finished at this point, and dragged our feet back to the bus stop, hiding behind it to have that tiny bit of shade – laughing at ourselves for being so British, complaining about this beautiful, gorgeous sunshine.  Back to Bristol for coffee and more conversation.

As always, my huge thanks to Tracy for being the best company.  I love that she trusts me to take her on these walks, and she’s such a rewarding, enthusiastic person to show things I love.   That combination of talking with stopping for photos, and understanding and indulging each other, while we fuss about with angles, is perfect.  Thank you thank you!  Everyone else should follow Tracy on twitter, if you aren’t already doing so.