My friend Tracy Homer puts up with a lot, walking with me, from clambering through ditches and up slopes, to battling knee-high brambles, walking after dark and in torrential rain, and more.  It’s a good thing she likes me, but I don’t want to push my luck, so on Wednesday’s walk with her, we walked a gentle route with no possibility of getting into scrapes – an urban nature exploration, following the River Trym from Southmead, where it first appears in Bristol, to Sea Mills, where it joins the River Avon.

The map of the walk is here:

And the photo album is here (mouse over or click on the first image and it should take you to the slideshow, or click through to flickr) 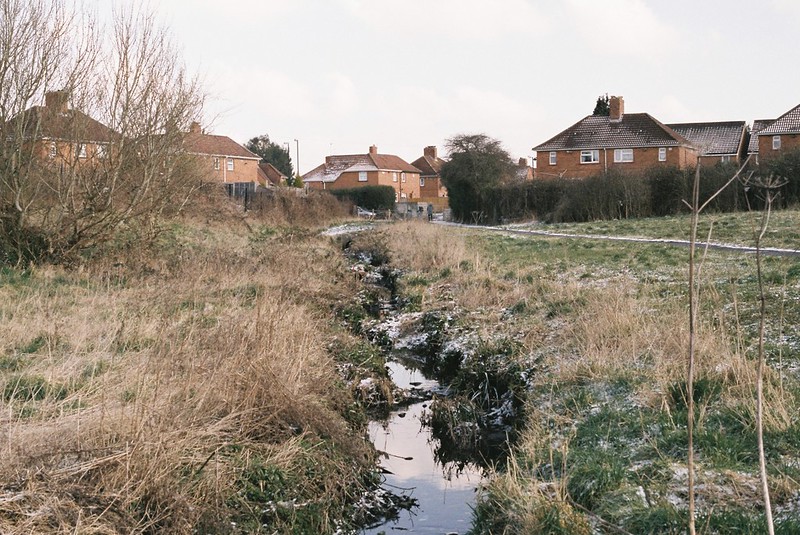 We started with another bus trauma, and my two pieces of advice to anyone using buses in Bristol to get walking are “get a DayRider” and “if your specific bus is delayed, just get on the next one that goes even vaguely close”, because half an hour freezing at a bus stop isn’t fun.  All the forecasts were talking about the snow hitting on Thursday, but there had been no sign of it all the way up, until we got into Southmead, where the sunny sides of the road were completely dry, but the shady sides were snowy, and pretty much all day, our footpaths were marked in white.  It was the perfect snow to walk on, firm and crunchy, and while there were clouds rushing to block the light, for most of the day it was freezing sunshine.

According to the internet, the Trym starts on Filton golf course, where there are springs, but it’s almost immediately pushed underground and rises for the first time in Southmead.  I think every river should have some monument where it begins, like the source of Pigeonhouse Stream, but it is an understated beginning here, carving a deep meander across the field between houses.  Despite the snow, it’s been a dry winter, and I don’t know whether the depth is because it’s usually fuller at this time of year, or because like all urban rivers, it has to take a lot of water run-off when the rain does hit.

We walked the semi-wild field section, and crossed into the entrance to Badock’s Wood, one of the Council-run nature reserves in Bristol, with crows calling overhead.  Tracy says this is a good place to see bluebells in Spring, but I don’t think I’ll recognise it, because it was this winter wonderland, with ice patterns on the river, and snow contrasting with the dark of the trees.  Beautiful, and the light was even more special because we had to wait for it.  If Tracy and I have a catchphrase when we’re walking, it’s “Look at the LIGHT!” and I was making her laugh counting down to when the sun would come out from behind a cloud. 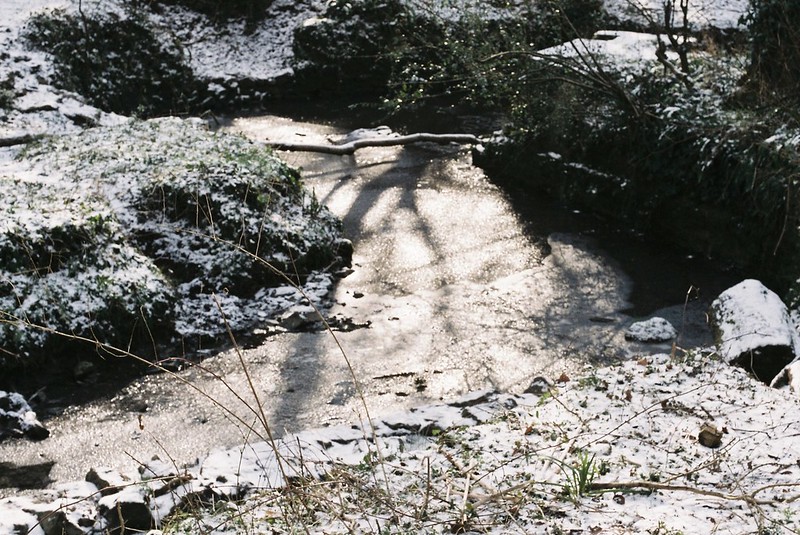 We got a little bit lost looking for the Southmead Round Barrow, because if there was a Bronze Age monument nearby, of course we were going to look for it.  It’s unmistakably a Barrow, but so matter of fact, in this field in the city, it takes my breath away. 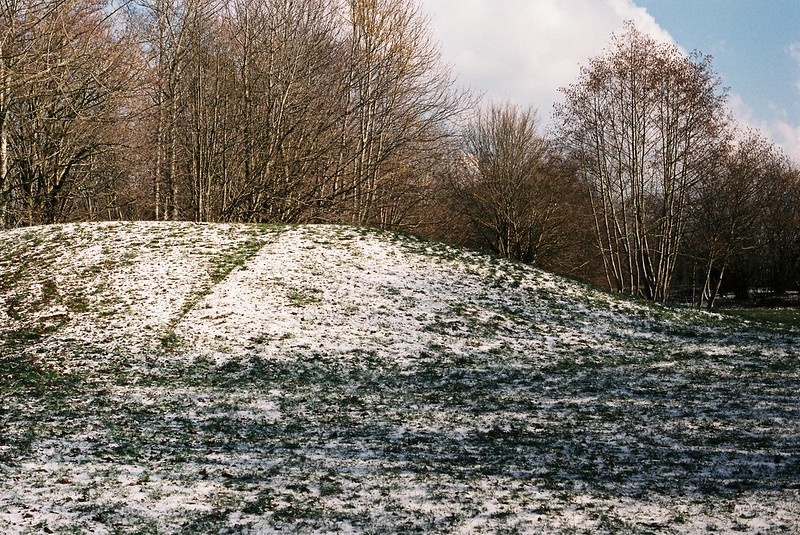 Back down along the river, and at the end of the nature reserve there are some severe fences blocking people from following the river, and this was something that came up a few times on this walk, how a river can change from public to private space so quickly, and who has access to the water.   It’s not unique to the Trym (it happened on my walk with Cee at Crox Bottom, for example) but it was really interesting on this one, both in terms of the big dramatic gates like this one, the mundane way it just vanished behind a fence, and the golf course, which we’ll get to later.

We diverted back up the path that was clear of snow, but silvered by the sun, and down a long alleyway that I couldn’t photograph at all, and into Westbury-on-Trym, diverting for coffee and cake in the Grupo Lounge, the Westbury branch of the chain that started in Bedminster, and always manages to feel like the friendly-shabby eclectic decor is the result of someone’s personal taste… until you go into more than two of them and realise it’s just as corporate by-the-numbers as the more high street coffee shops! I’m not criticising, it’s very clever, and the coffee and warmth was much needed.  We sat in the window seat and laughed at how strange contrast between the sunny and snowy sides of the street were. 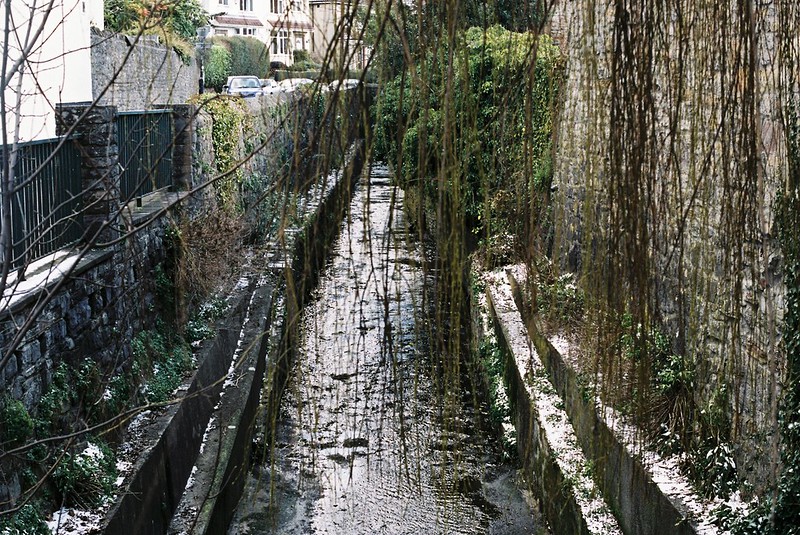 On the way down I’d missed where we’d crossed the river, kept in concrete culverts, with the very Westbury touch of window-boxes attached to the railings.  It’s strange that Westbury sees itself as a village in the city, and the river’s there in the name, but the Trym seems so ignored by the planning.  We followed it down alongside some houses, with birdfeeders attached to the trees over it, and had to divert as it ran behind that fence, and we ran over the main road, and took a new kind of typically urban river path.

This section has allotments on one side of the river, and a narrow path on the other side edged with garden fences and occasional gates.  It’s that typically urban footpath, each different garden having a different fence or wall, the wood panels covered in tree shadows, and occasionally glowing green where the sun hit the lichen.  And at the end, the ultimate public-private river moment, going into the Henbury Golf Course. 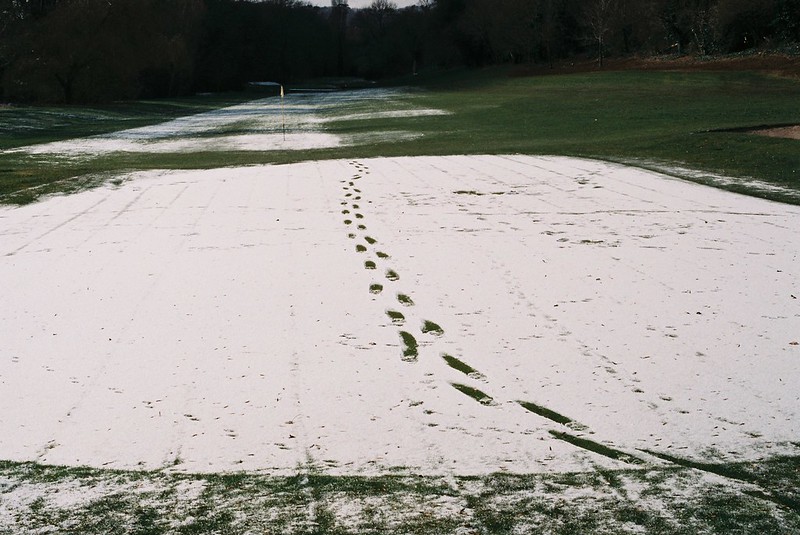 Everything about the golf course has a genteel sneer at lesser mortals who don’t belong.  The public footpath runs right across it, but the way in looks like it’s an accidental hole in the fence, and once you get in, there are no signs to tell you where to go, only if you’re a golfer.  We followed the footprints of dog walkers in the snow, but it was still confusing trying to work out the footpath on the OS map in real life.  We found a somewhat suggestive sculpture of a man’s hands grasping his club, and a spring that had been artificially grotto-ised, but it was lucky Tracy spotted the gate out, or I’d have been wandering around the greens for ages.  (I genuinely don’t understand this as a tactic by the golf club – they clearly don’t want to oiks to be on there, so having footpath signs would be useful to get us out as soon as possible.)

The gate out was such a clear transition point.  Behind us, everything manicured to within an inch of its life, ahead tussocky course grass on a field that looks just… there.   So weird how the snow had melted off almost everything except for the path.  We crossed one of the strangest footbridges I’ve seen – not rickety, exactly, but like some kind of small scale, curved cattle grid over the river, actually super-grippy, but it took us a moment to get the confidence to step on it!

The next path was a narrow, off-camber muddy trail through rhododendrons, with a steep drop down to the river, so we were veeerrryy careful walking here, talking the slowest descents, and at the bottom there’s a transition into Blaise Castle Estate, where the Trym joins Hazel Brook (definitely on the list to walk up). 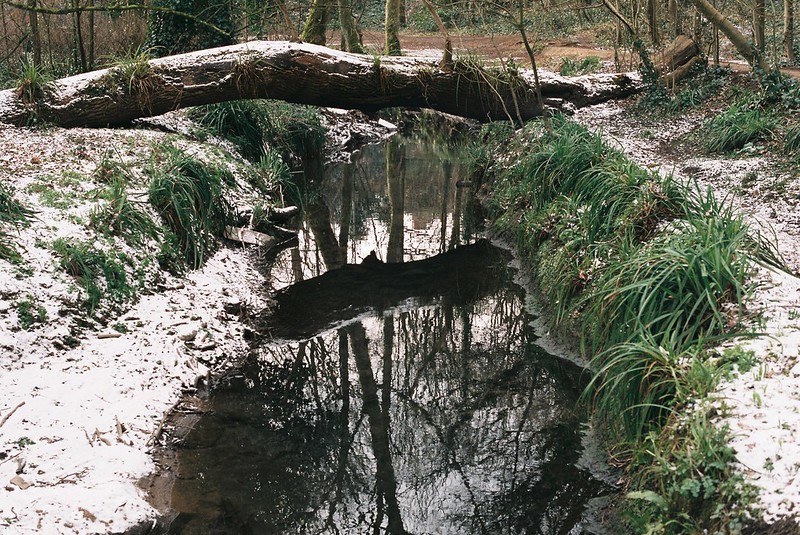 Lots of happy dogs frolicking, and a feeling of being in a park, with a long footpath lined by tall thin trees, that ran along a concrete wedge, some kind of pipeline, disguised?  A small flood defense? 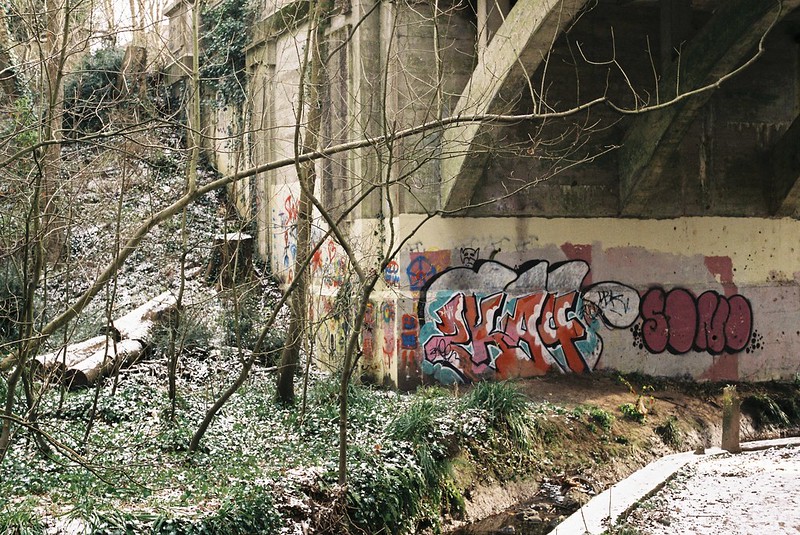 Under the Coombe Dingle bridge, and the clouds massed overhead, and the snow started again, so we picked up the pace.  Through another open section along the river, where a large heron flew overhead, and crossing the road into the final wooded section that opens up into the open space at Sea Mills, where the former Roman port-town of Abona used to be (find out more about that in my podcast).  We watched a group of crows mobbing some large raptor – a young buzzard maybe? and then we could see the road and rail bridges, and the Avon beyond them, the end of the walk. 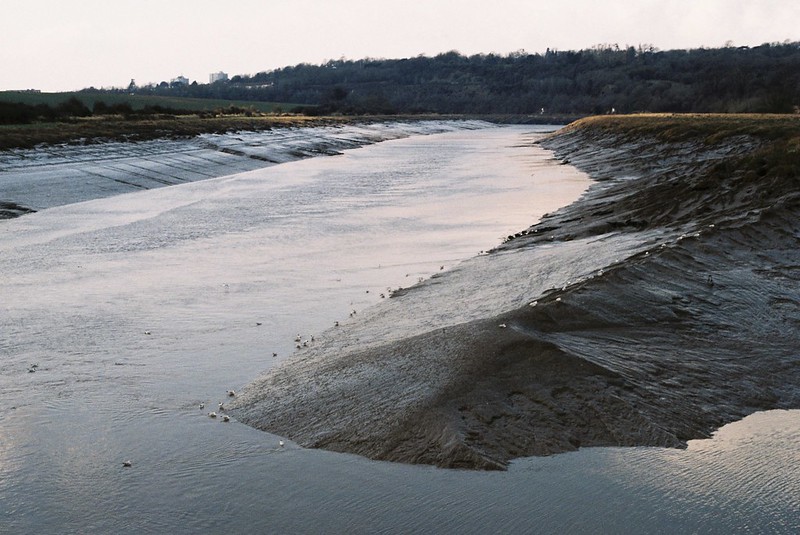 I love that we’ve got to the Sea Mills viewpoint to look at where the Trym meets the Avon on a few different walks now, and seen it at different tide heights, but it was definitely time to head to the bus stop.  We stopped on the road bridge to get one last picture, and then turned for home.   It’s the first time I’ve walked one of the rivers from start to finish in one go, and it was a beautiful day for it – and like I say about every walk, one to repeat, and see what it looks like in other seasons.  I’m really happy we did that, and I’m looking forward to doing it again.