I really enjoyed the Bristol Walk Fest, and the last walk we went on was completely fantastic, one I’ve seen in the past, and wanted to do:  the Avon Valley Walk, run by Susan and Rob Acton-Campbell of the Friends of Troopers Hill.  It sold out very fast, but Vik and I put our names down on the waiting list, and were lucky enough to get places.  I have to admit, that when we were on the bus on the way over, and a massive torrential thunder storm started, we were a bit worried, but it was a fantastic day, taking in a secret bath-house, an incredible tree, water meadows, riverside lunch, a ferry, and so much more.  If you ever get the chance to go on a walk run by the Friends, do it!

I’ve tried to map the walk – apologies to Rob and Susan if I got it wrong!

And I have an album of my photos over on twitter (hopefully if you mouse over/click on the first picture, it should start the slideshow too…) 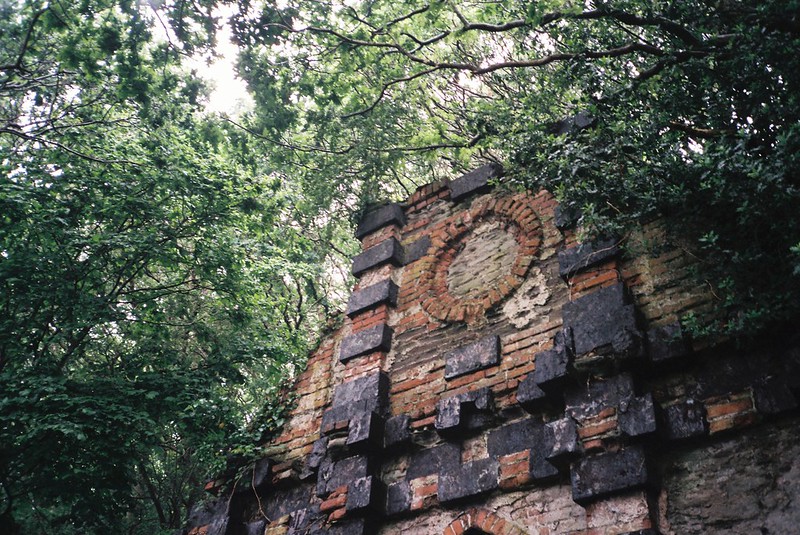 And Vik has a couple of her holga photos from the day, which I love, over on her flickr album: 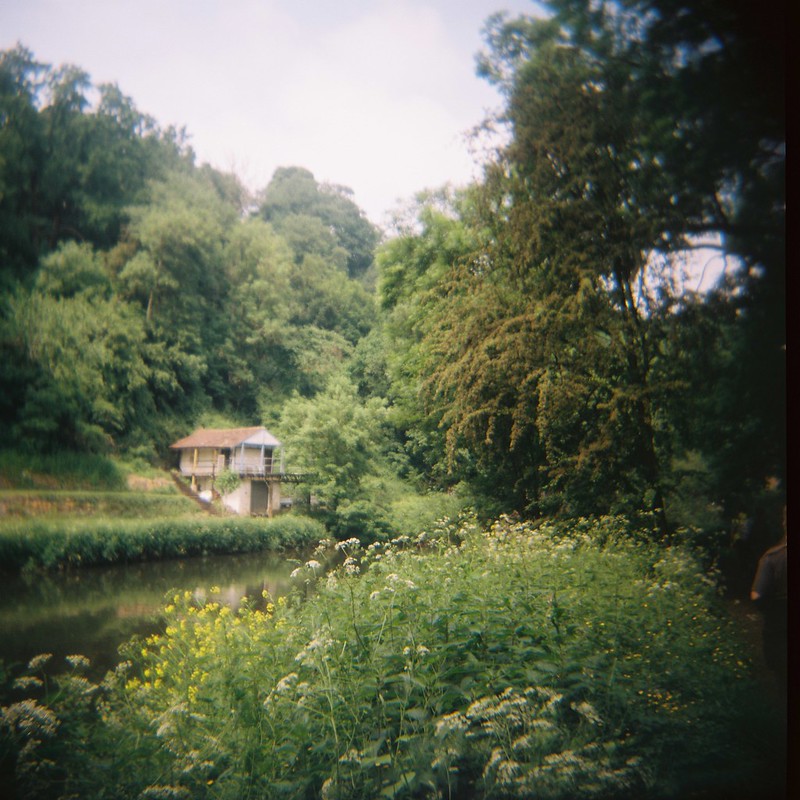 I’m not exaggerating when I say the storm on the way over was torrential.  The rain was bouncing high off the pavement, lightning was crackling across the sky, with booms of thunder, and when we got off the bus, we got drenched as we ran to a cafe.  We’d had that choice of two buses, one that would get us to the start on time, the other early, so we had time for a coffee, but were already wet as we walked to the start. 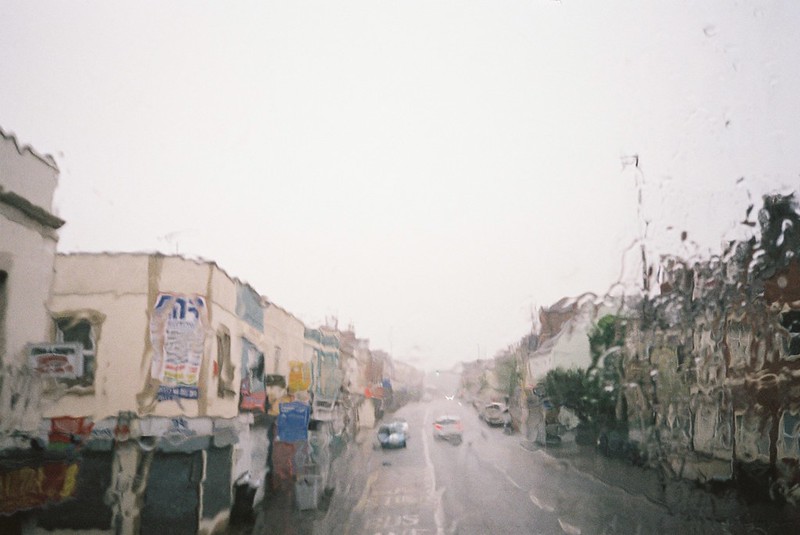 I really felt sorry for Rob and Susan, because the walk had been fully booked, with a waiting list, for weeks, and in the end only 7 of us turned up.  I can’t blame the others, but it was a huge shame on one hand… but on the other, I do prefer a small group walk!

We met on the edge of Troopers Hill, and started off through the alleyways skirting woods and allotments, until we got to the super-steep Strawberry Lane.  We walked down, and then had a special surprise treat, as we were allowed through a private garden, to find the 1750s bath house. 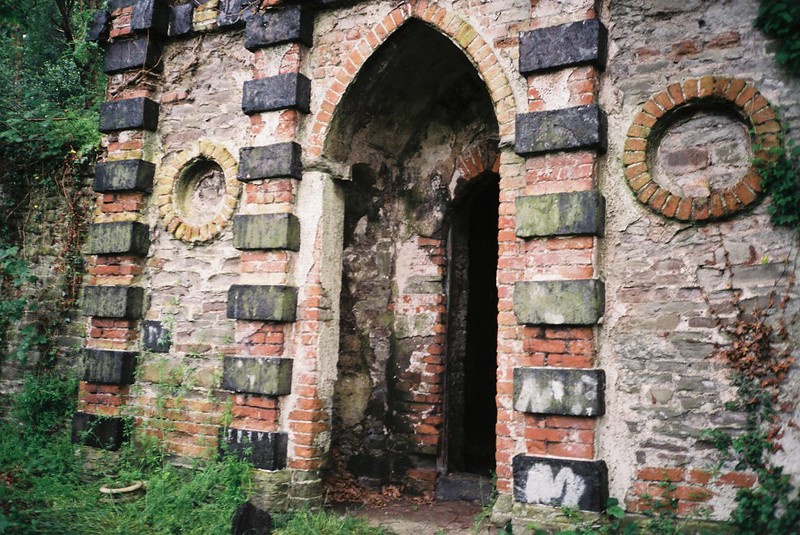 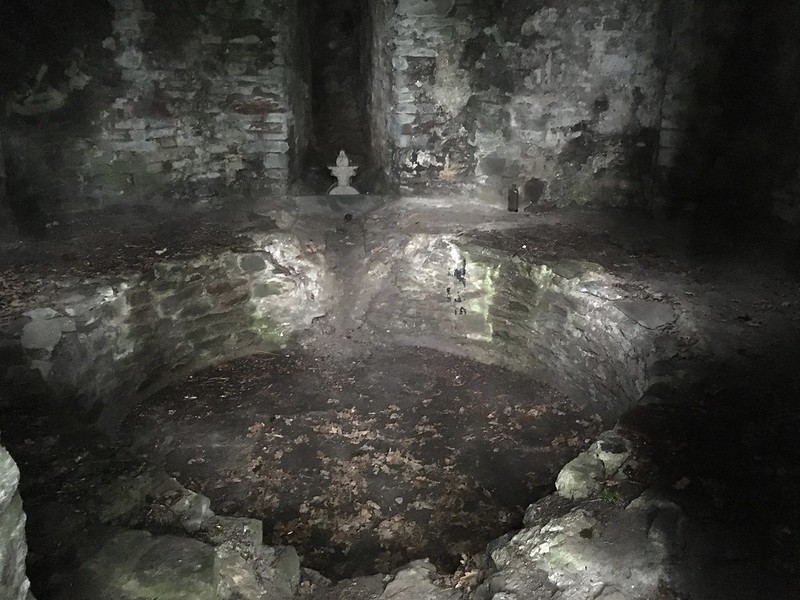 So unexpected, tucked away in the woods that used to be terraced gardens running down to a glass factory on the banks of the Avon.  It would have been rendered white, with the black memory stones (building blocks made out of the by-product of brass smelting, from the days when the Avon was lined with brass works that made brass and copper that was the currency of the slave traders – Richard White told me all about it in our podcast last year).  The bath house would have been visible for miles, with incredible views for the wealthy people sitting in the spring water that flowed in, then out down the hill.

I loved getting to see this, and the garden we’d walked through – and then it was down, down, down to the river path.  There’s always something about the patchwork of the structures along the edge of the path. 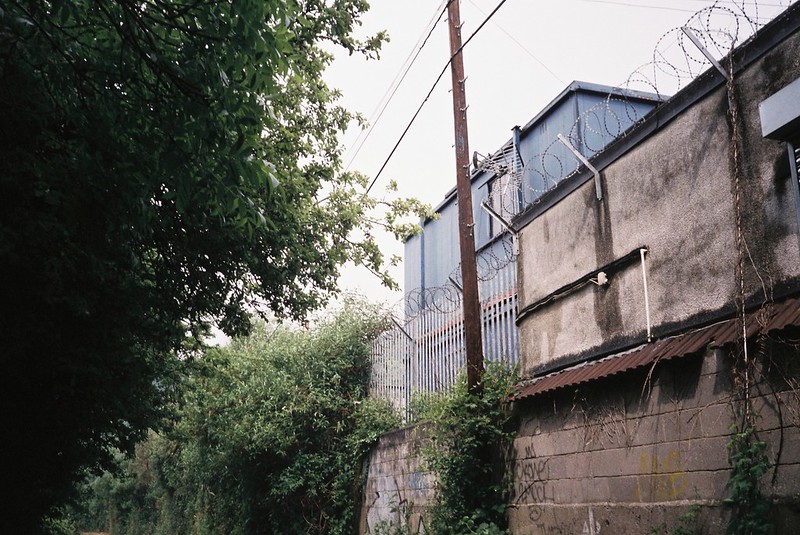 We walked along to see where Brislington Brook meets the Avon, and Rob showed us a load of his excellent print-outs of old photos of where we were, as he did throughout the walk. 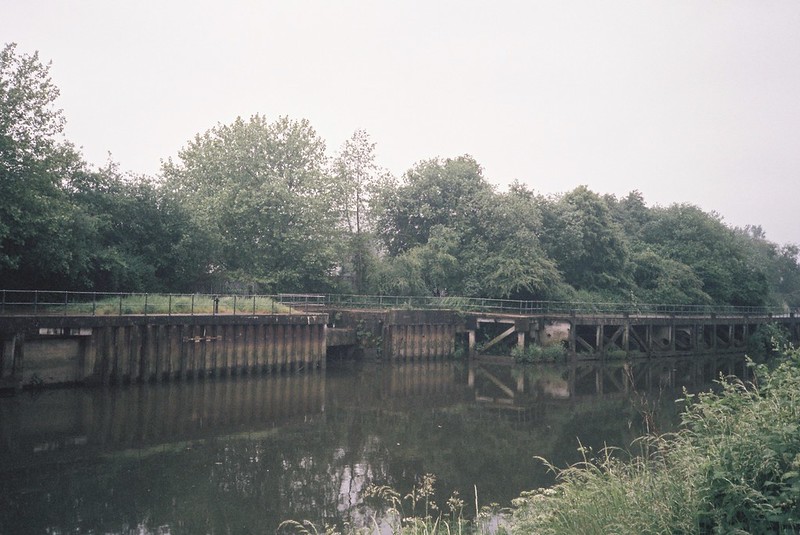 By this time, the rain had stopped, and the temperature had risen, so everything was steaming, and we all stripped off our rain coats.  The views from the footbridge were hazy, but we could see the tower on Troopers Hill, where we knew we’d finish. 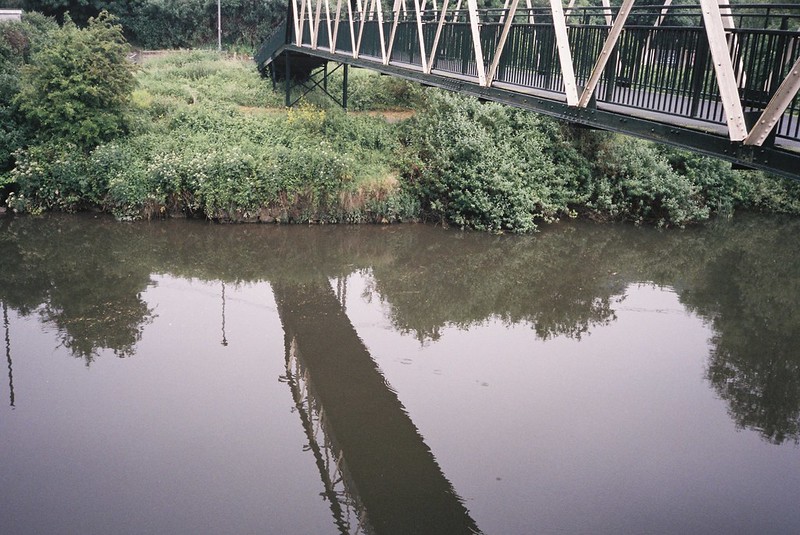 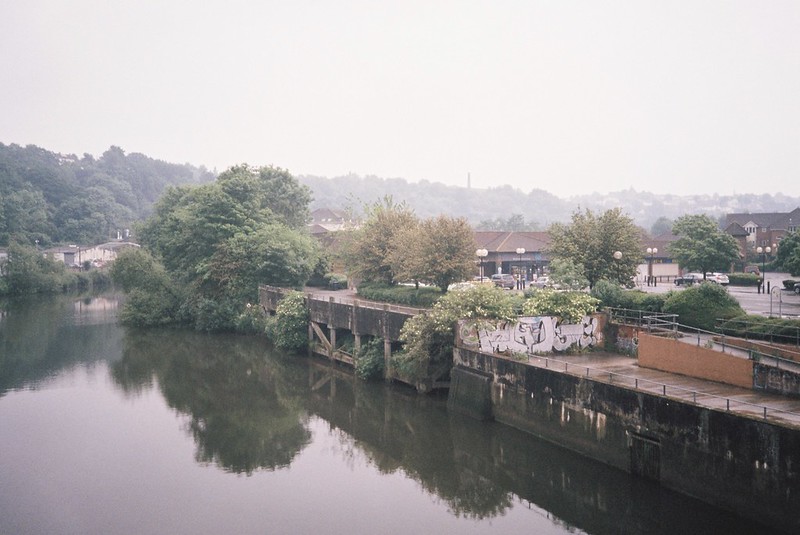 We crossed some roads, and took the footpath into woods again, and soon were walking alongside Brislington Brook.  I’ve been looking at this river for months, making plans to walk it start to finish that have never worked out, so I was really excited to see it for the first time.  We walked through a water meadow, where you could only follow the progress by the change in the plants, and then stopped by St Anne’s Well. 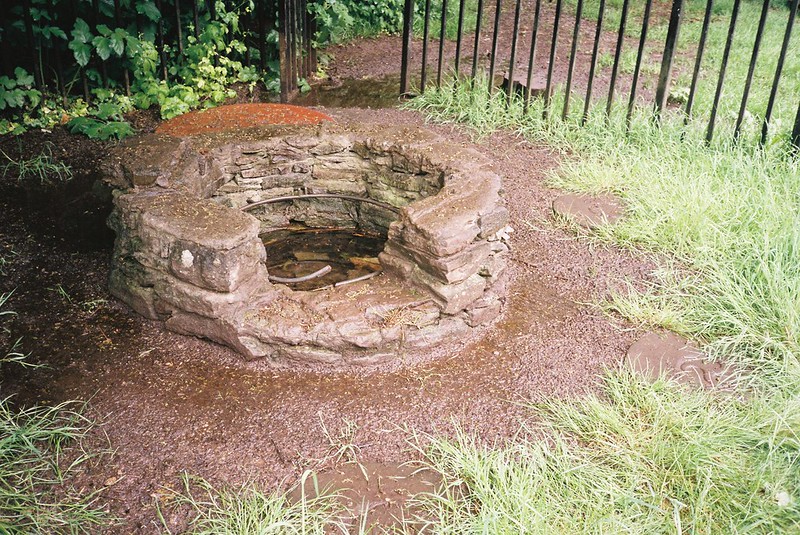 There are a lot of legends about this well – that it was a holy well dating back to medieval times, that it was famous for fertility powers, but sadly it looks like most of that was Victorian inventions… though in a way, that makes it more interesting to me.  If you want to know more about it, check out this book by Ken Taylor, and the Q&A on the Friends of Brislington Brook website.  I really loved seeing it – it’s been on my list for ages.  The sky was grey, and as we walked on through the woods, the light was pretty bad. 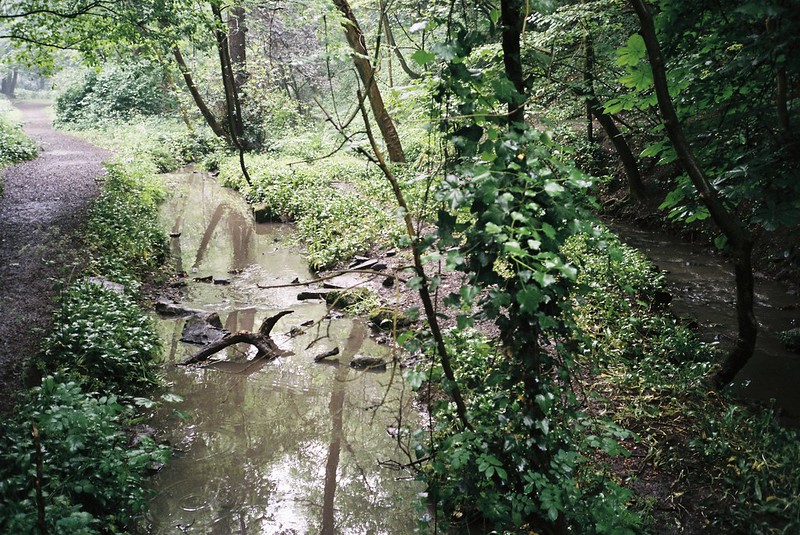 We crossed a footbridge and walked up some steps for a little road section, crossing the main railway line to London, which I’ve traveled so many times, then taking an alley down into woods again.  I especially liked see the Brislington Boat Screen – the entrance to one of the storm drain Interceptors, named because it apparently looks like a boat.  It carries a lot of the brook and road run-off directly to the Avon, and after all the rain early, was noisy and full. 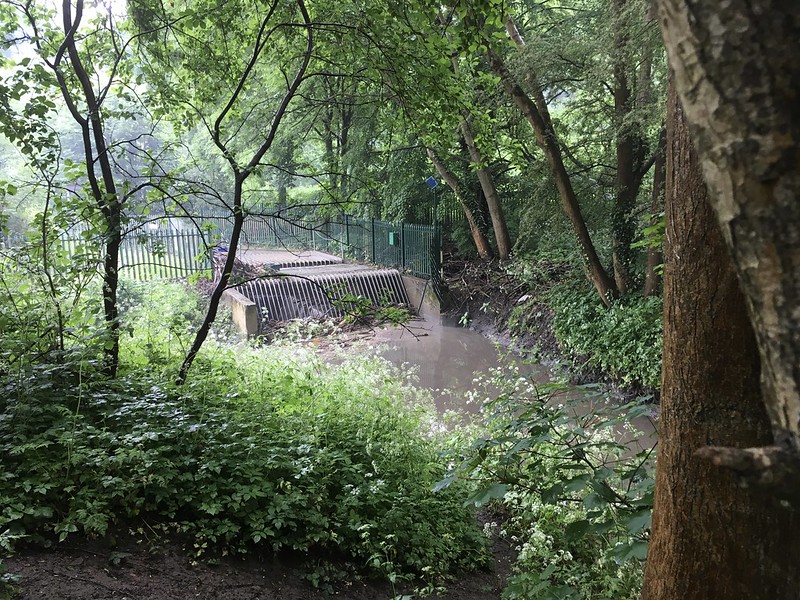 Unsurprisingly, the Brook was wider from this point, and we were into woods again.  We crossed a beautiful pack horse bridge, from an ancient track, and then Rob told us he was taking us to see a very special tree – and he wasn’t joking! 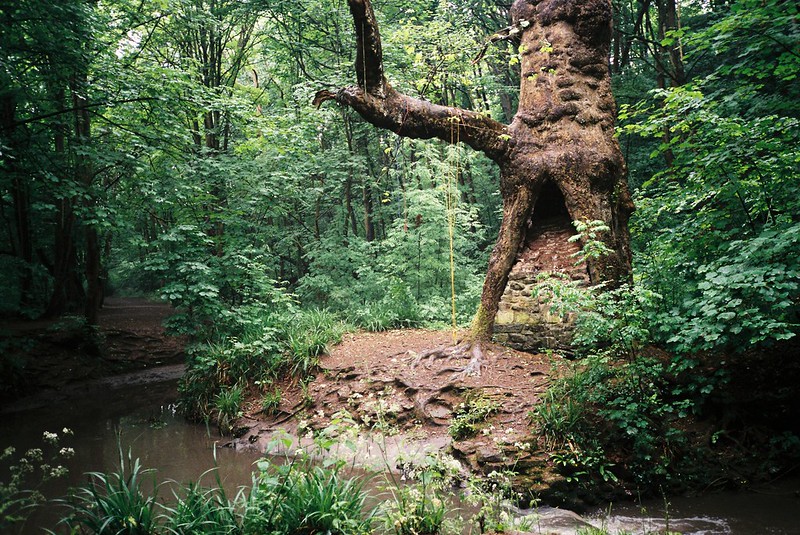 This is a huge plane tree, apparently the oldest plane in Bristol, and it towered above us, looking like something out of a folk tale, and not necessarily one with a happy ending.  The bricked up hole in the trunk could be sinister, if you wanted to take it that way, but it had a more prosaic/depressing meaning – that people had lit so many fires in the hole in the tree, they were killing it.  Ugh, some people. 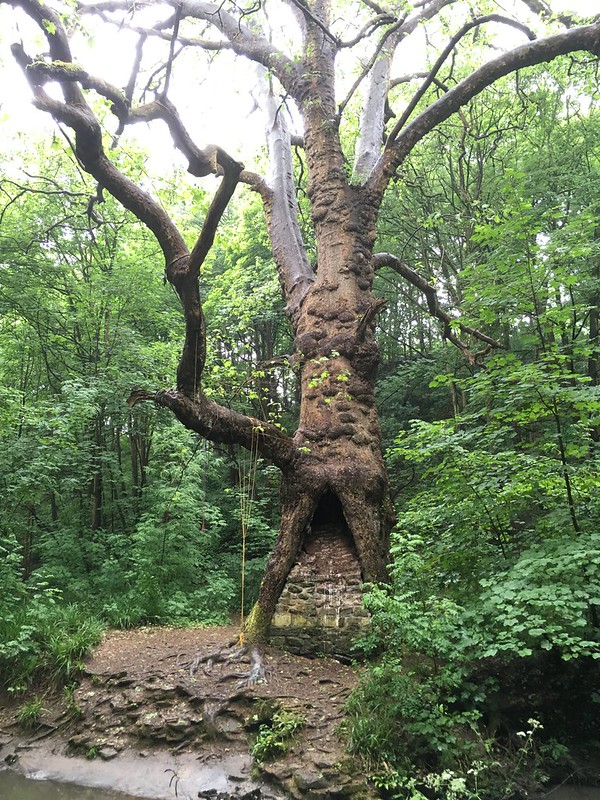 Here it is in the past (thanks Michael!)

Yes it was sad to see the end of this branch, part of my childhood. pic.twitter.com/ITwSBpkZ1k

We went back on ourselves, and left the brook, climbing (again) past allotments, and then along a road section until we got to the edge of Eastwood Farm. 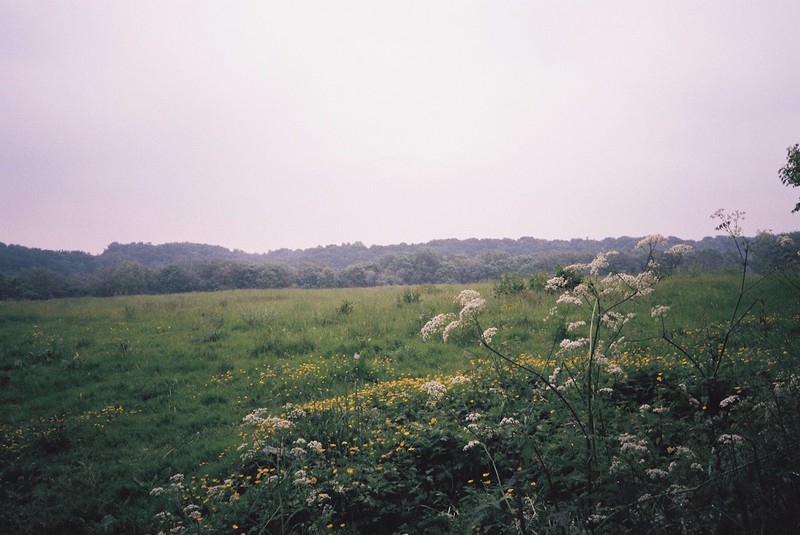 This was the last dairy farm in Bristol, until it closed and a road was planned to go right across it.  That never happened, and instead it was a huge city dump, used for landfill in the 1970s, then grassed over, and in 2008, turned into a local nature reserve.  I knew nothing about this, and I absolutely have to go back! 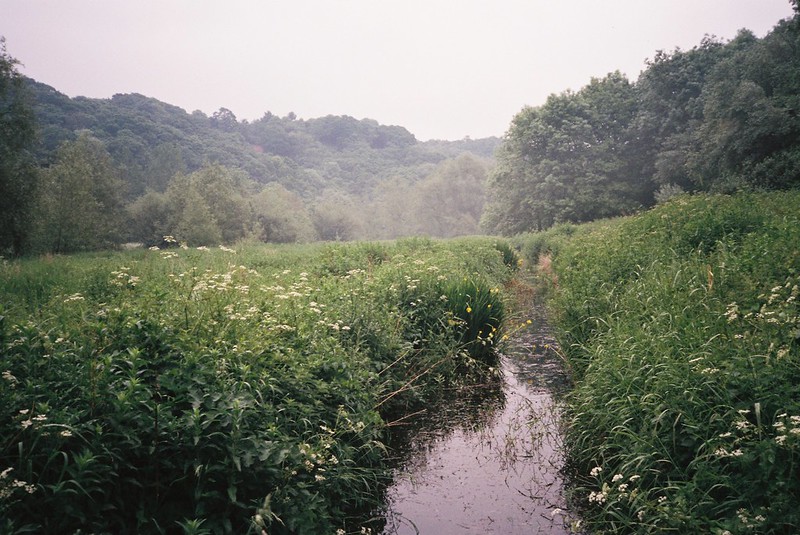 In a day full of hills, we walked down to the water meadows that border the river.  I hadn’t expected the lagoon, a long stretch of water full of lily pads and flag irises, that apparently gets re-filled by a pipe from the Avon when it’s the Spring tides, although the water meadows also flood in winter. 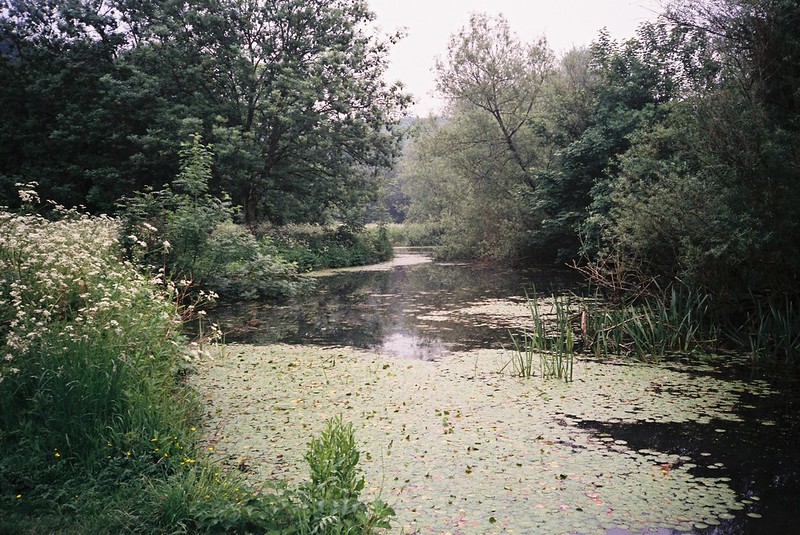 We walked east, to a small pond with a dilapidated dipping platform.  This was made by a huge bomb that landed here in World War II, when Bristol was bombarded by the Nazi air force, and so much of the city was destroyed.  The crater is metres deep, and it gets filled on the extra-high Spring tides over winter, then the water level drops over the year until it re-fills again. 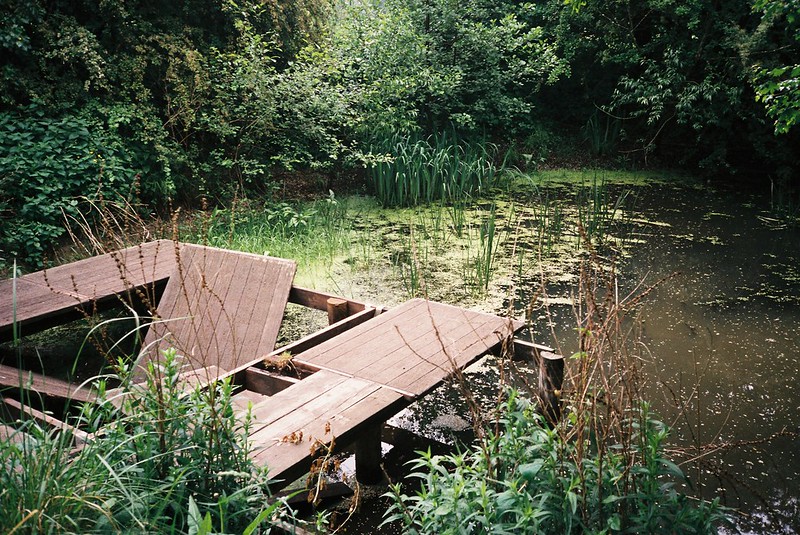 We turned back on ourselves, and headed to lunch at Beese’s.

Beese’s is a riverside venue that you have to check is open before you go, and probably best known as the destination of various Bristol Ferry trips, to live music and beer on Friday nights, cream teas, and Sunday lunches.   By this time the sun was blazing, and the place was full of people.  It’s right on the Avon, and they run their own 25p ferry across the river.  We sat and talked, and ate, then got the boat across for the last part of the walk.

It was so green! The river reflected the trees and flowers alongside it, and there was that smell of water on a hot day, with the feeling of the end of the rain evaporating off everything. I stood by the water and watched it as we waited for the second part of the group to cross. 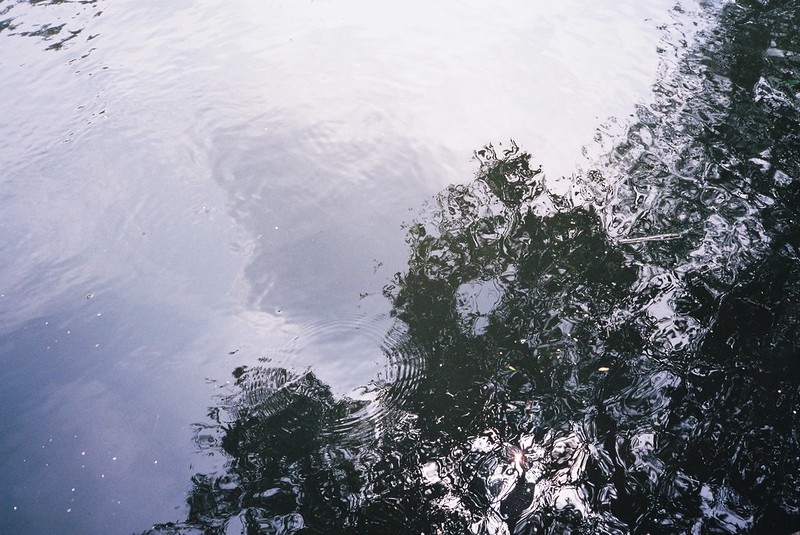 We walked round the curve of the path along the edge of the Conham River Park, another nature reserve, this time in South Gloucestershire.  On the other side of the river, there’s the viaduct that carried the train line to London, a series of rowing club boat houses, and the place where the Brislington Brook interceptor meets the Avon, with a LOT of water still tumbling out. 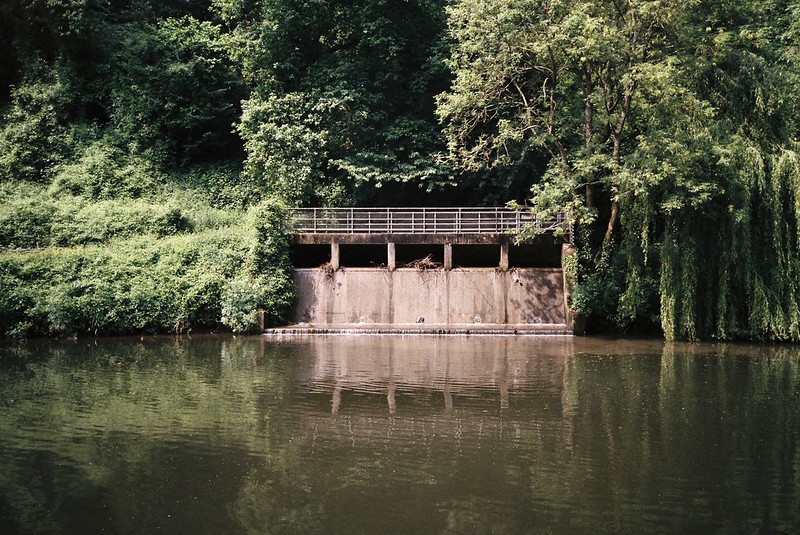 We carried on around the river, coming off at the public toilets (you know we were in South Glos as they still have public loos, unlike Bristol…) and then walked up a road of cute cottages, to the Stradbrook, the boundary between the two areas.  This is also on my list, and one day I’ll walk it from start to finish.

Climbing up a steep path again, and through the tree-lined avenue in Dundridge Park, talking about the Irish referendum with a woman who’d worked on the Together For Yes campaign, as we walked through alleyways and down more steep, twisting roads.  We turned down another narrow alley, and the last descent of the day, with gorgeous views across to Troopers Hill, our destination. 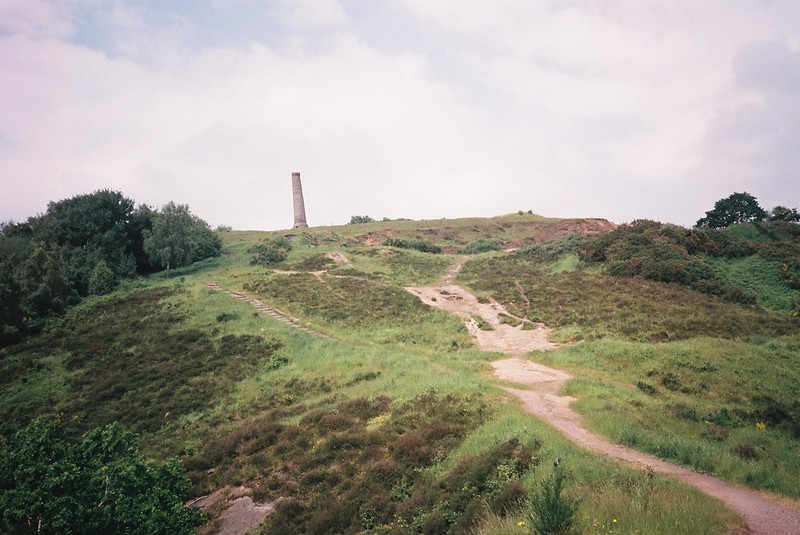 Of course, we had to get up to the top first!  At the bottom, there are more mine workings, and the footpath climbs up the undulating hill side, looking at the steep quarried sides and the erosion that’s been there since the 1950s. 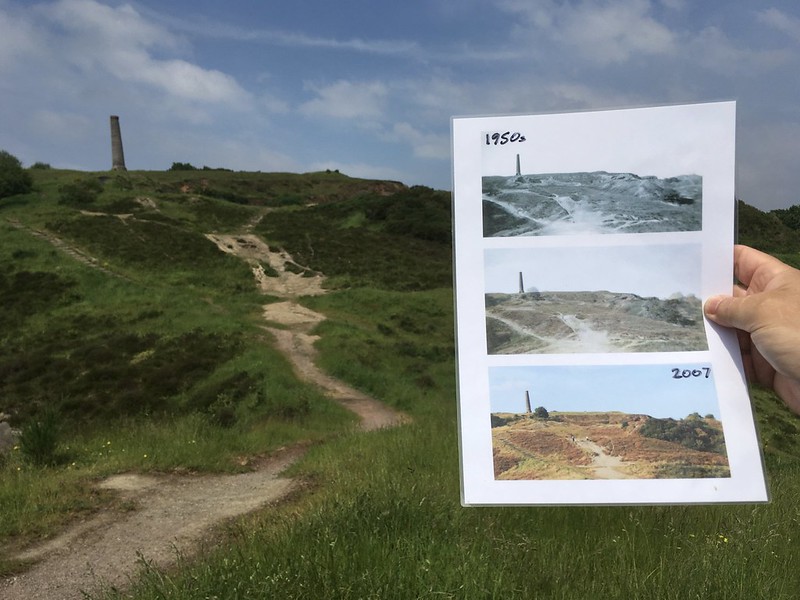 My everyday photography problem is never being able to take photos that are straight – they always tilt a couple of degrees, and I pretty much always have to rotate them straight again – but the chimney on top of Troopers Hill really does lean – Bristol’s equivalent of the Tower of Pisa!  We climbed and climbed, with what would have been spectacular views on a clear day, but were still gorgeous – across to the city, back along the river, the hill sides covered in trees that are pretty recent, relatively speaking.  Not so long ago all the river valley was full of factories, making tar, glass, cardboard, all kinds of things – now the sites have lots of modern homes, and lots of trees. 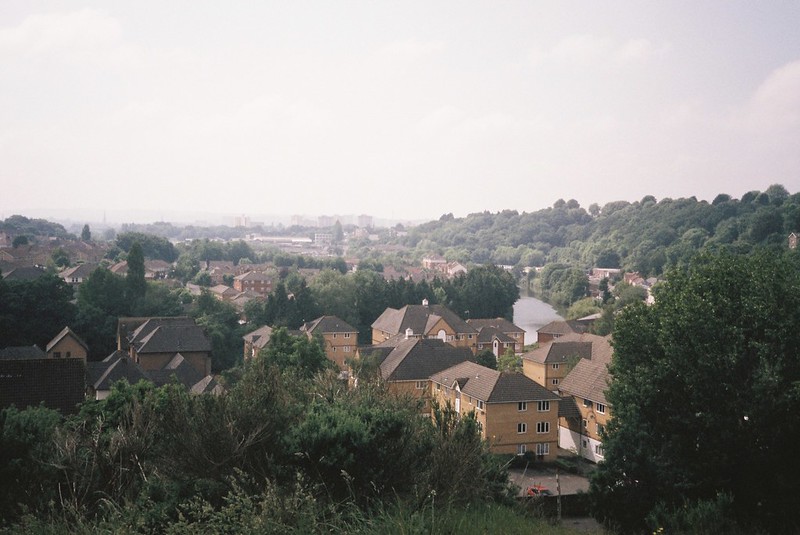 We got to the top, and threw ourselves down in the grass to get our breath back, and take it all in.  Of course I went into the chimney to see what’s inside (Bricks!) 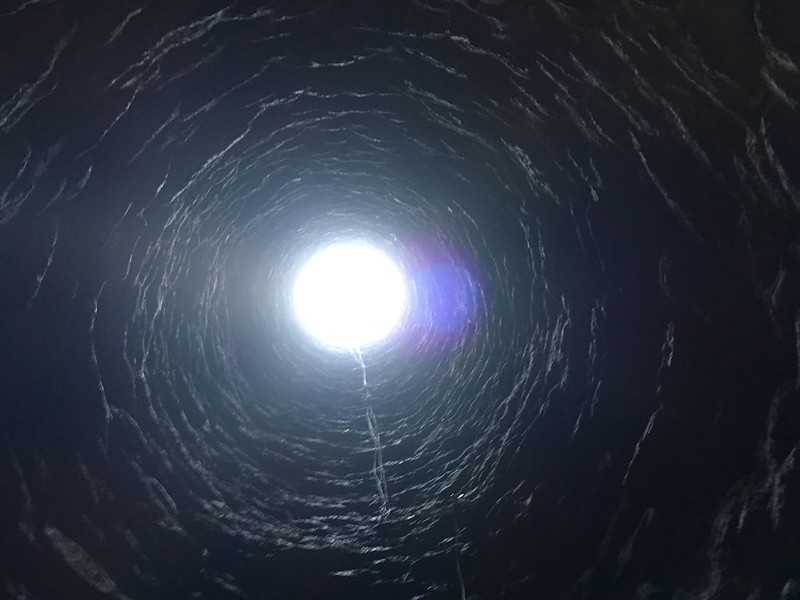 We sat in the sun and talked and looked, amazed that it was still the same day as those thunderstorms.  I’m so glad we weren’t put off by it, that they started when we were way too near to go back.  It was fantastic to discover so many new places, and re-visit the Avon paths from different angles.

I highly recommend following Rob Acton-Campbell on twitter,  as well as the Friends of Troopers Hill, and when they announce more walks, sign up, right away!  The Friends of Troopers Hill website is packed with information about the area, and the Discover East Bristol interactive map has more ideas about walks.  If you’ve never been to these parts of town, it’s well worth the bus ride, or the walk along the river to explore.

Huge thanks to Rob and Susan, and of course to the Bristol Walk Fest team, for making this happen.  I’m sad May is over, but I can’t wait for next year!