This summer, I experienced something that was legitimately one of the very best things I’ve done in Bristol, and something I’ve longed to do for years – I went on the Bristol Ferry trip down the New Cut, to Netham Weir.

This is a rare trip anyway, as the Bristol Ferry Boat Company only run a couple of these a year, but for the last year they haven’t run them at all, as Ashton Avenue Bridge was covered in scaffolding for the Metrobus works.  In the past I’ve only seen these trips after they happened, but for the 6th July expedition,  I booked my tickets early, and persuaded some friends to come too – my good friend Matt Gibson, Charlie Revelle-Smith of Weird Bristol fame, and landscape architect Wendy Tippett, who I podcasted with last year about the Sylvia Crowe landscapes of the Cumberland Basin, and her architect husband Andrew.

Here’s the map of our trip:

and my album of photos – click through, or mouse/swipe over the first photo below, and hopefully you’ll see a slideshow.  I took a lot of photos, so I’ve written about them as well below… 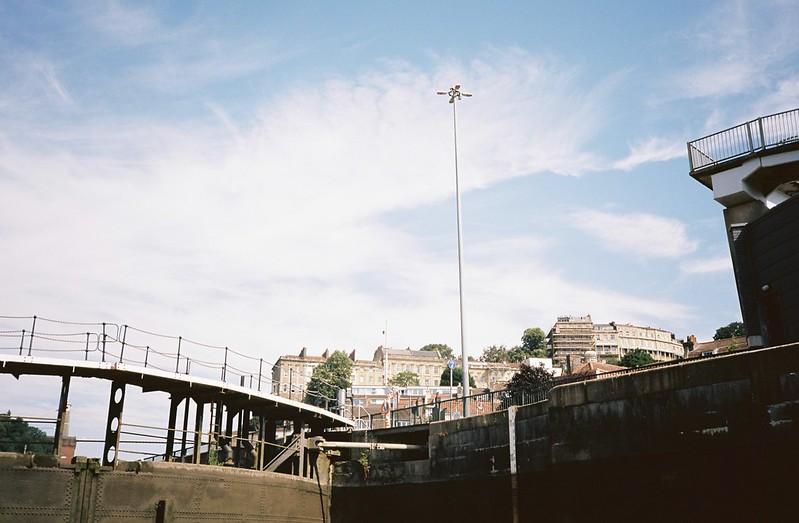 If you want to know about the New Cut, before I start, check out my podcast interview with Roy Gallop of the Friends of the Avon New Cut, who told me about the history of this very special part of the Avon.

END_OF_DOCUMENT_TOKEN_TO_BE_REPLACED

I really enjoyed the Bristol Ferry trips down the River Avon, but I’m very excited about an upcoming trip I’ve booked on – taking the Ferry down the New Cut.

This is a rare trip, especially because they were stopped completely for the last few years as the works on Ashton Avenue Bridge as part of the Metrobus works dragged on and on, and there are only two more planned for 2018, on 6th July and 14th August.  I don’t know how far it will go, but I absolutely can’t wait for the July trip, because I’ve always wanted to see the Cut from this angle.  It costs £18 for adults, or £15 for concessions, and the trip on 6th July leaves from the SS Great Britain landing at 10am, and will take around 3.5 hours.

It will be extra poignant this year, given that the Chocolate Path alongside the Avon is closed indefinitely, with no clue about when, or even if, work will start to re-open it.   But it will be a fascinating trip – if you come too, say hello!  You can see more about the trip, and book tickets, on the Bristol Ferry website – and there are more of their trips here.

This one’s a shorter podcast than usual, just 9 minutes long.  It’s an interview with John Raymond-Barker, who runs RB Boatbuilding in Underfall Yard at the end of the Floating Harbour.   He’s one of the last links to Bristol’s long tradition of boat building, and he specialises in making Bristol Channel Pilot Cutters, a type of boat that evolved in Bristol and Cardiff, to deal with the unique and treacherous conditions of the Bristol Channel, while racing to get as much lucrative piloting business as possible.

John told me more about the boats, and his work, and I hope you enjoy it.  If you want to know more about RB Boatbuilding, visit his website, which includes a page about the Pilot Cutters – and there’s lots of information about the Underfall Yard, where he’s based.

I got to scramble around a Pilot Cutter while it’s being built, and you can see those photos here (click on the picture to access the slideshow)

END_OF_DOCUMENT_TOKEN_TO_BE_REPLACED

I’ve lived in Bristol for 17 years, and I’d never been on a Bristol Ferry trip on the Avon… until this week!  It was very, very wet, so I’ve sped up the film so the raindrops on the lens don’t interfere too much, and so you can see my trip in 10 minutes

It was such a lovely thing to do.  The lock from the Harbour to the River seems almost unnoticeable, very smooth.  And then, although I’ve cycled up both sides of the river, and walked the Portway, I’d never been this low.  I couldn’t believe the river is around 8 metres deep on the way back, as it doesn’t seem like it could be.

It was so meditative, especially once the rain drove everyone else inside, standing in this downpour, watching the water.  I never knew herons lived in a colony, in trees, until it was pointed out on the commentary, and there’s something about the mud that I love.  Everything was green and grey, with a bit of green, and I really want to do it again.

You can book your own Gorge trip on the Bristol Ferry Boats website.  It costs £15, and it took around 2 hours and 15 minutes, but that depends on the tides (we were going against the tide going out, and much faster coming back).

Big thanks to Tim who lent me his GoPro Session, which the film is shot with.