Back on 7th July, Vik and I went looking for streams on Dundry.  Our plan was to find as many of the streams that join together and form the Malago, and then follow the river right down to where it joins the Avon… but things didn’t turn out that way.  To be fair, it wasn’t all our fault – and we still had a lovely day and saw lots of new things, even if we didn’t see as many streams as I wanted.

Map of our walk here: 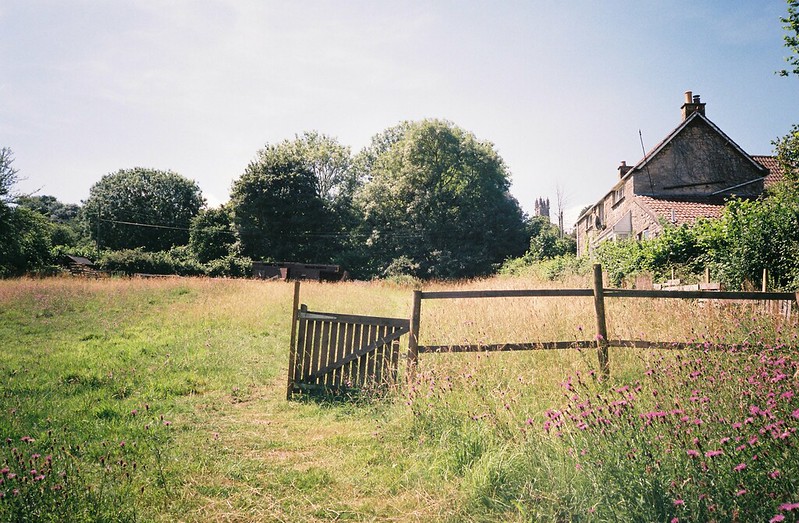 And some gorgeous photos Vik took, in her flickr album.

I also have sounds, words and photos below…

We took the bus to Highridge, the south-western corner of Bristol, and headed up through the estate and footpaths up onto the Dundry Ridge.  It starts off steep, and right from the beginning, we could see the impact of the heatwave, even though it was only a few weeks old.  While the meadows were full of that purple that says “midsummer”, and the grass was still green, we could tell how quickly the heat had set in, as all the fields were not only baked solid, but full of ridges and rough shapes which had been formed of thick mud and seemed to have set like concrete in a flash.  The Dundry ridge is usually riddled with streams, and it’s usually lush and wet underfoot, but right from the start of this walk, we knew this heat was unusual.

The meadows were full of thistles, and the sounds of insects in the long grass, with caws of corvids, and the thrum of traffic behind us.  We had to stop in this one – it sounded and looked so gorgeous. 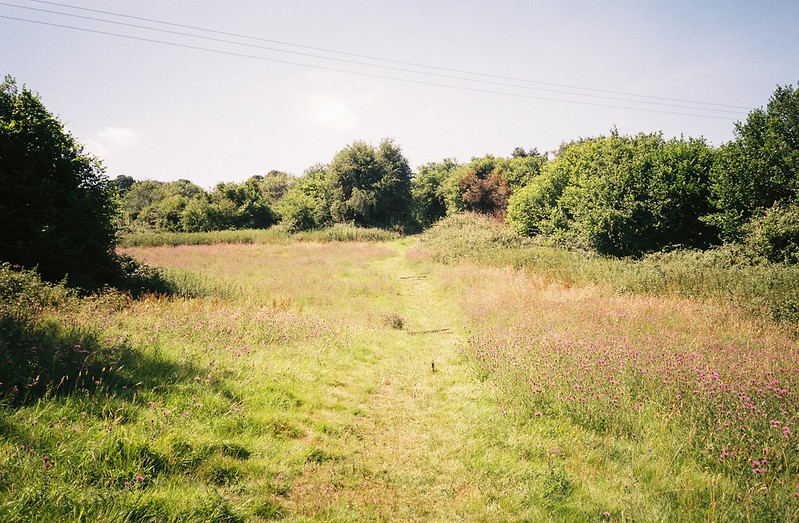 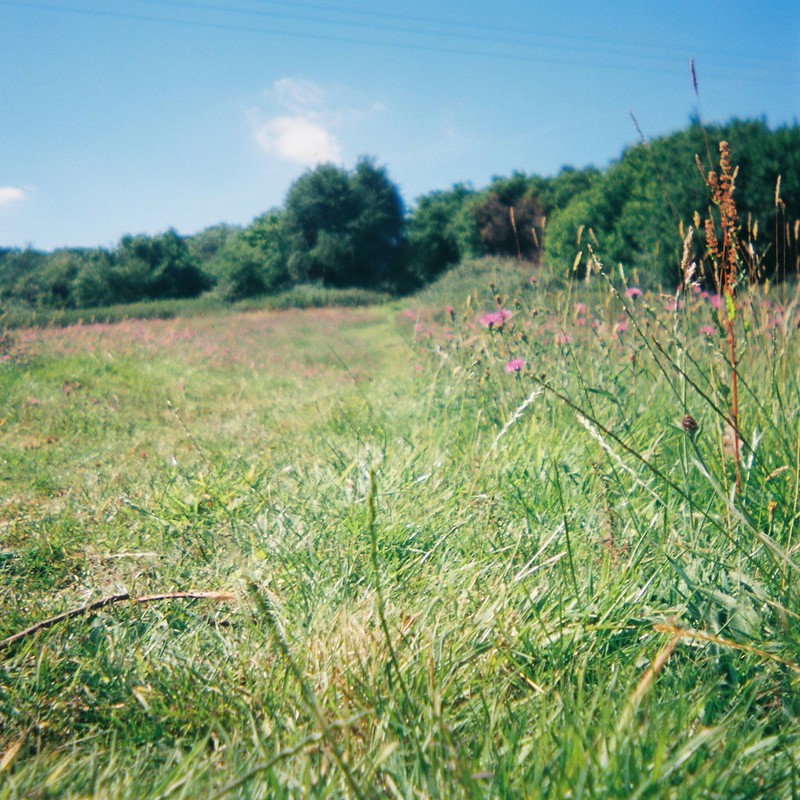 We diverted to look for the stream that runs down through the woods, but it was down to a trickle, so we set off up the hill again, getting steeper and steeper.  It was odd, seeing planks of woods nailed into the ground – I guess as makeshift steps, and again, the shapes of the cracked and dry earth told us how muddy and slippery this section  usually mud be. 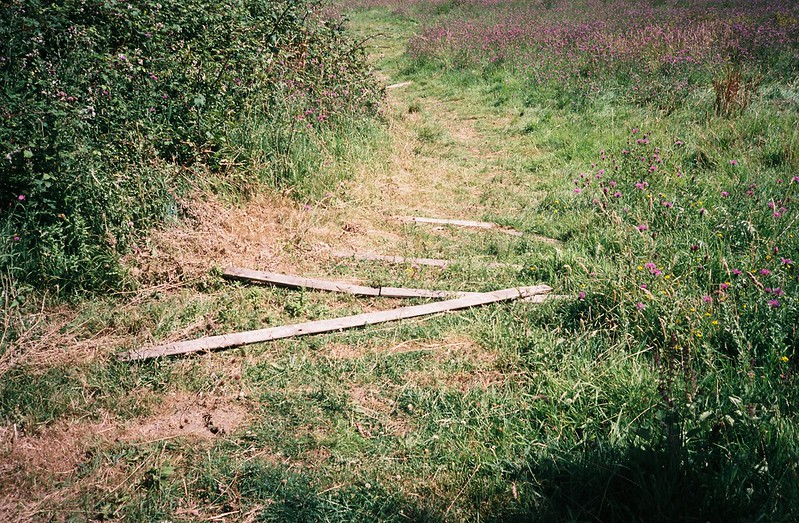 I really liked the half-gate – I’ve got a thing for gates that keep out nothing, like this.

Vik’s version, from her holga looks so much better:

At the top we passed an empty stable, and crossed the road into a field I can see from my office window across the city.  There are a number of streams that run through this field – or there should be, but in the drought, the one that was the border was just a muddy trickle, this time surrounded by baked hoofprints of cows looking for water and shade. 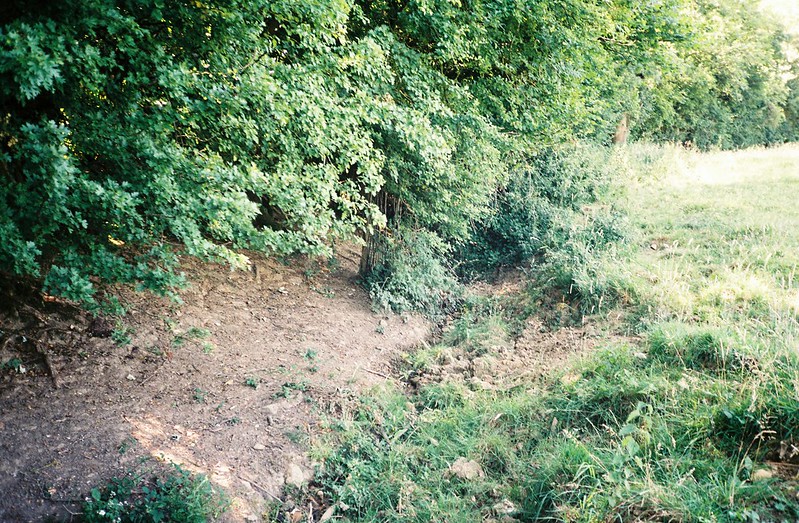 It was a hot walk up the hill, but luckily the views are incredible, so there’s plenty of excuse to stop, and turn round.  At the top, we squeezed ourselves down the tiny concession to a footpath from the people who clearly didn’t want scum like us walking alongside their drive, and climbed the steep stairs up to the village – this time luckily in shade, as we were really feeling the heat. 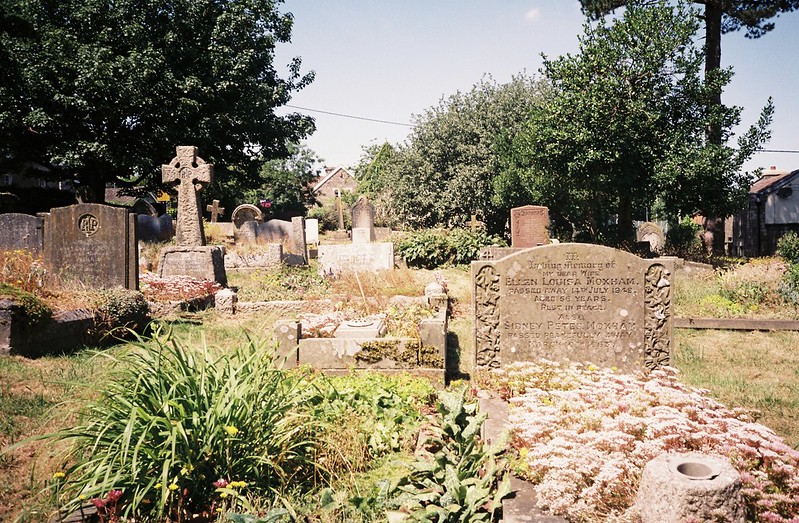 We both love looking around churchyards, so we stopped in the the Church of St Michael to drink water, look back on the city, and admire the surprising planting.  The church tower is famous, but I loved what had been done in the graveyard, where a sign told us how a couple of local people had seen a programme about how insects are struggling, so they’d planted the graves with different kinds of plants that would attract pollinators. The sedums were buzzing with bees and other insects, with different graves planted for different seasons.  It was beautiful, very mellow and gentle, a lovely place to stop and breathe, though of course the stones are still poignant, especially the war grave of a young man who was just 18 when he died at the very end of WWI – if his birthday had been 6 months later, he would most likely have never gone… 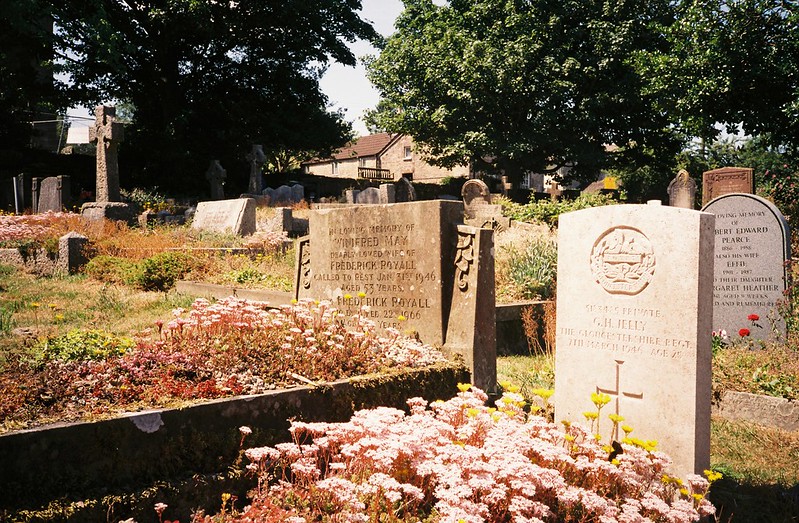 We had a little look around the village, then headed back down the steps and the unwelcoming path, to skirt the top of the field, making friends with a dog whose garden ran alongside us.  We could just about make out the line where one of the streams should run, and after a little mis-step, at the end of the field found the start of another one, in what would usually be a boggy patch of land.  It was one of those places where water just oozes out of the ground and eventually some of it joins up into a stream, the kind that is making me reconsider my notion of what a “spring” is. 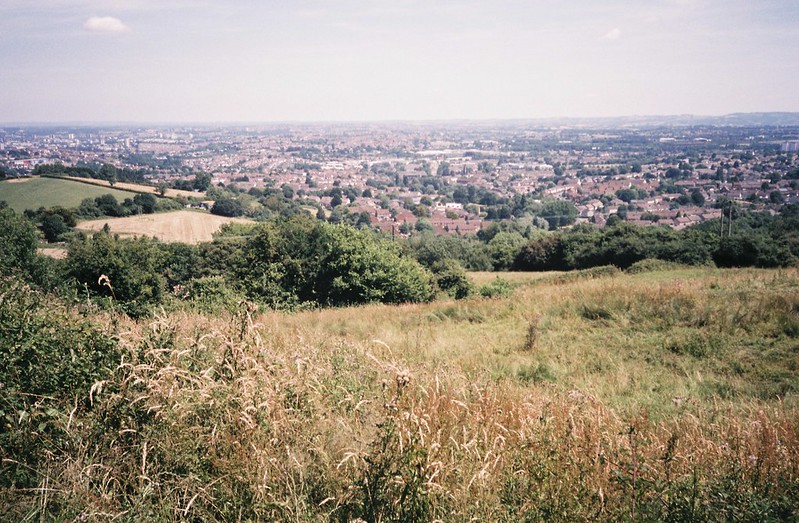 We’d found our streams, so headed back down again – with me cursing my stupidity, as I realised all the camera films I’d brought for the day were sitting helpfully next to the sofa…

We’d seen signs of cows all throughout the field, and as the path lead down through a corridor of woodland, we startled the young herd, who’d been sheltering in this shadiest patch.  Down through a paddock full of ox-eye daisies, and down some roads, to what should have been the last bits of footpaths…  wishful thinking… 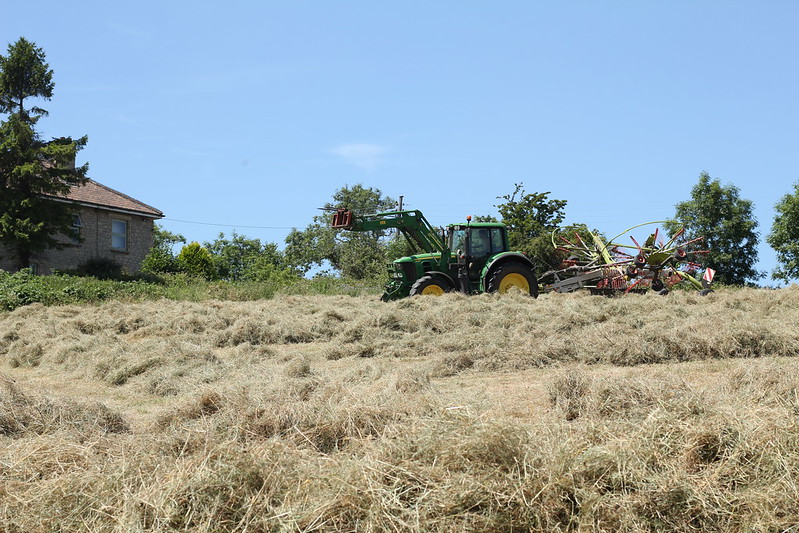 I should have guessed something was up, as the entrance to the field had been a clear path, but was now nettles and brambles.  The field here was being cut for hay, and we were fine through the first field and down into the second, but then we could NOT find the path out.  It was supposedly one more field then following a stream back through Highridge, but clearly whoever owned that farm had decided to close the path.  We thought we found where it should have been, according to my OS map app and GPS, and there was a piece of corrugated iron slung over the barbed wire that we used to cautiously climb over, but beyond that, the field was all shoulder-high stinging nettles and brambles, and there was no clear way out.  We were so close to where we needed to be, it was so dispriting, but we had to turn back and risk all kinds of things, levering ourselves back over the corrugations, to trudge back up the hill and along Oxleaze Lane, adding another mile to the walk. 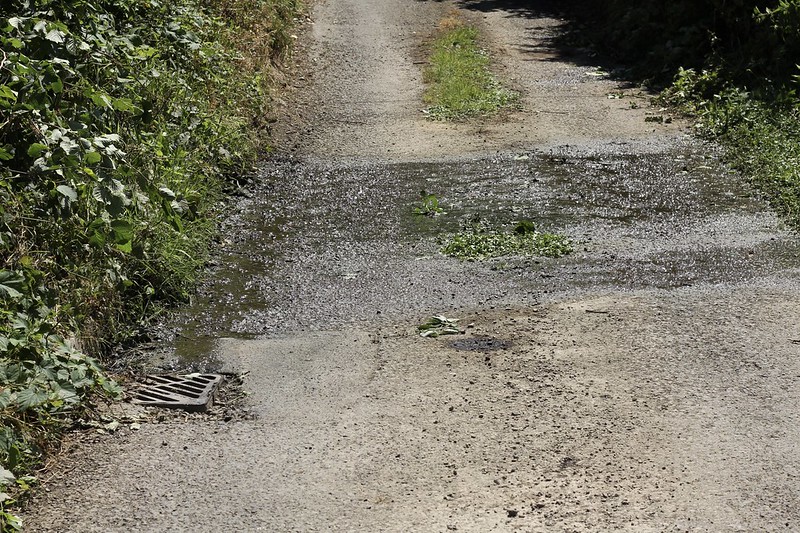 The thing that made up for it was seeing the weirdness of Dundry water.  There were so many drains by the sides of the road, carrying streams we could hear, and then there would just be water running straight across the road, with no channels, just like someone had left a tap on, and then down a drain.  And this in the drought!  I really want to come up here in a wet spring, or winter, to see what it’s like in a rainy season. 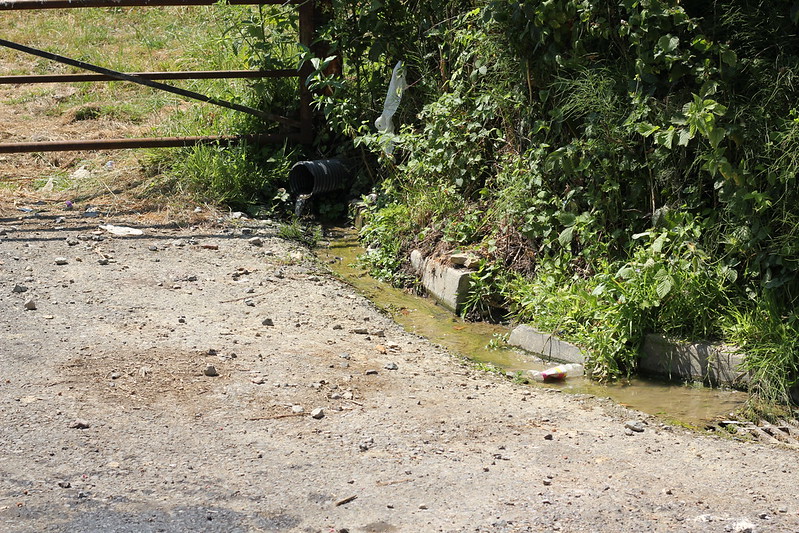 Another stream came out of that big field we’d crossed the top of, in another strange way – out of the field via a pipe, to run down the side of a gateway, before disappearing down a drain.  I don’t know if there’s a practical purpose to the water running like this, or if it would just be too much work to stop.  I recorded the sounds of it coming out of the field:

and going down the drain:

We took the path back through the meadows we’d walked up, but took a path into the woods, where we met a super-friendly man with a gun who told us about what he was hunting, and how he’d been watching a hawk through his telescopic sight (but wouldn’t dream of trying to shoot it).  We found the Malago in these woods, and looking for the river, two tell-tale scenes – a home-made rifle range, and weirdly, a busted up kayak that someone must have dragged up the hill knowing it was very unlikely it could ever actually float in the Malago… 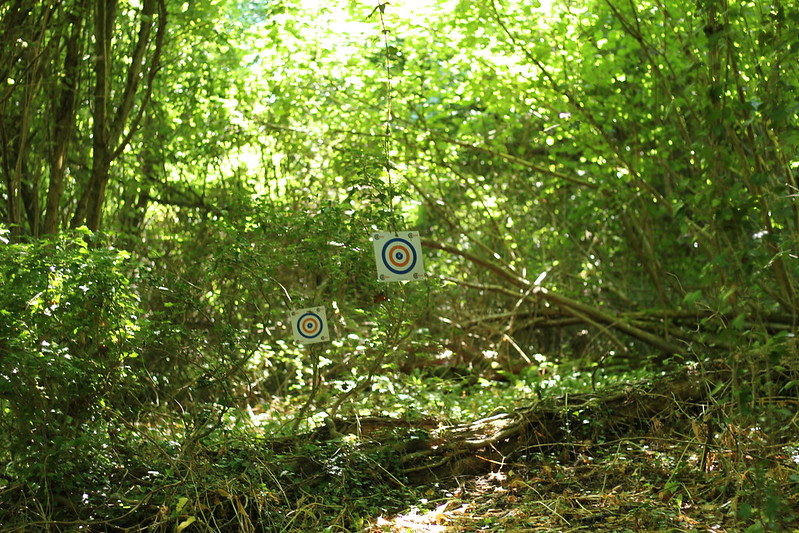 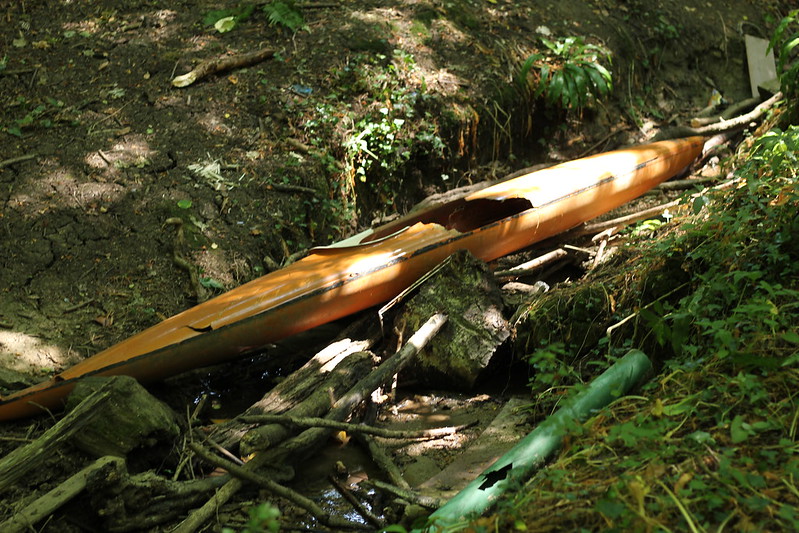 We jumped the stream bed and followed it down back into Highridge, alongside a road with a great outdoor party of people waiting for the football, and through a fenced-off section I’d explored in January and February, when I was working in the neighbourhood.

We stopped for ice cream, because by now we had to, and walked over the top of the Malago, now culverted, as it ran under Withywood Park.  There’s a bit of main road to stomp down as we had to divert from the river, which runs through allotments, while we took Grange Road and the alley to Derham Road, which the river runs under again.  Then we diverted again, taking our lives into our hands to cross Whitchurch Road, but getting a gorgeous view down Headley Road, which I can never photograph, but really want to, as this ordinary road drops down to the dip for the river, before swooping up again.

The river is stealthy here, emerging from the allotments to hide behind a big fence.  At this point, overheated with very little phone battery, and just a 50mm lens on my DSLR, my photographic abilities had deserted me, pretty much – but I took photos here (and in other places from this walk!) back in January. 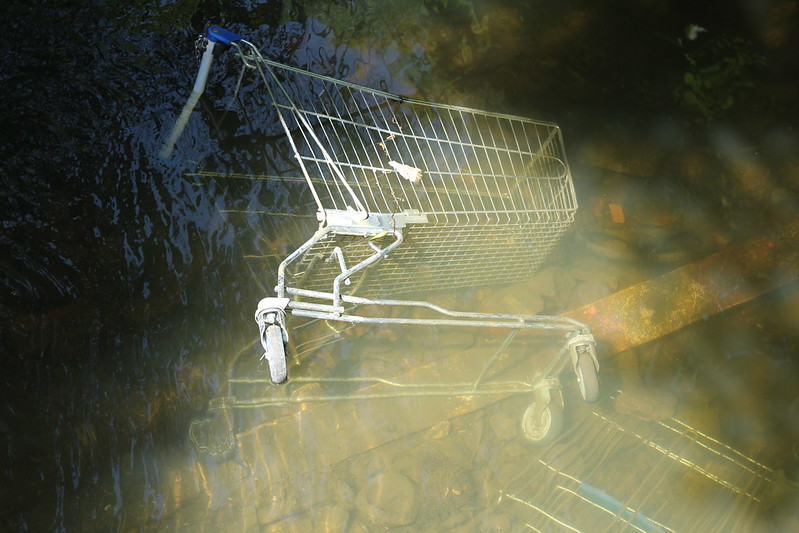 We took the alleys along the river and behind the houses that border it, and (after another ice cream diversion) into Manor Woods Valley.  In retrospect we should have taken the woodland path, for the shade, but we wanted the quickest way, at this point.  The grass here was scorched yellow, and the river level so low, compared to walking here in February and October.

Like the grass, we were fading fast, but we stopped by the ramp-weir, as is now traditional, and to look at the Dreadnought Interceptor.  It’s supposed to divert storm water, but it seemed to have taken the entire Malago, as the riverbed leaving the park was completely dry. 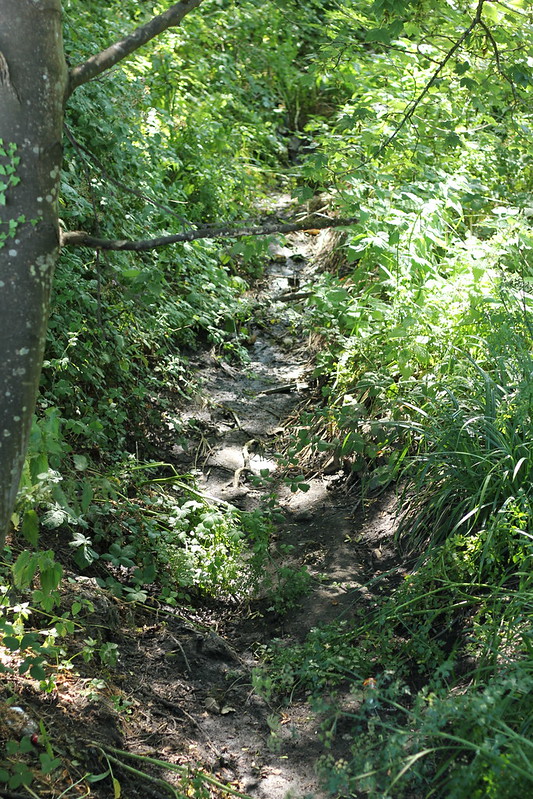 I’ve been wondering what happened as the heatwave ramped up over the weeks that followed.  I’ve sat in my office and from the distance watched those fields we walked in turn completely yellow, and then back to green, after a few weeks of rain in August, but I can’t stop thinking about these streams – will they come back?  Will the wildlife that lived alongside them survive?  It’s scary how quickly the heatwave set in, but the whole year has been drier than it should be, and I wonder how many of these streams marked on my maps will just evaporate and disappear? I hope that in 50 years there are still people walking alongside them on Dundry, and this year’s weather is an anomaly, and not a sign of the future…